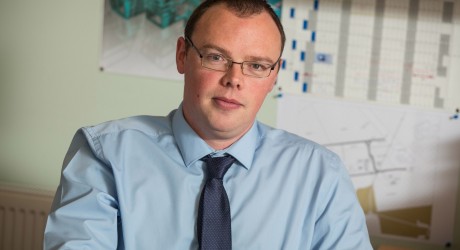 A NORTH-East marine equipment specialist has unveiled its plans for a company re-structure and worldwide growth, following multi-million pound investment in 2014.

Motive Offshore, which is headquartered at its 30-acre site in Boyndie, near Banff, in Aberdeenshire, has been restructured as the Motive Offshore Group, comprising of two key operating companies, Motive Engineering and Motive Rentals, allowing the company to strengthen its offerings for clients in the UK and internationally.

The group, which is entering into its fifth year of business, has experienced considerable growth since its inception, investing £3.5 million pounds in its rental equipment in the last two years, which has seen an overall increase in turnover from £5.2m in 2013 to £7.8m last year.

As part of the restructure, the firm, which currently employs more than 100 members of staff, expects to create a number of jobs for the local area and has invested a six-figure sum in its branding and marketing, working with Scottish Enterprise to define and align the objectives of each division across the group.

The firm has ambitious growth expectations for 2015, following successful developments at its first international base in Stavanger, Norway, which has exceeded its expected turnover figures to NOK 5m in 2014 and secured several large contracts since launching at the end of 2013.

Chief executive officer of Motive Offshore Group, James Gregg, said: “The company re-structure marks a pivotal time for the business as it continues to expand with an increasing portfolio of clients and workforce. The market is currently facing some challenges but we are continuing to strengthen our position in the industry, continually re-investing profit in our equipment and people to drive the business forward and offer our clients innovative products and an unrivalled service.

“It is great to be heading into year five with ambitious targets for 2015 as we focus on worldwide growth and further employment which is vital for the local economy and the skills shortage in the industry. The restructure is part of strategic growth plans and will allow us to concentrate on strengthening both divisions which will undoubtedly benefit our clients and accelerate further expansion of the group.”

The firm, which specialises in high capacity winches, umbilical deployment equipment and specialised subsea equipment, is planning continued investment in product development in 2015, specifically its umbilical equipment including reel drive systems and tensioners.