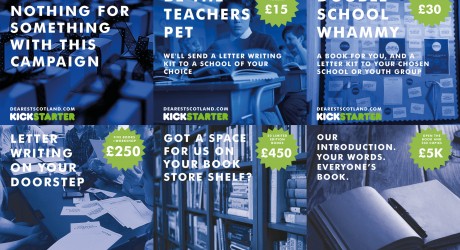 As part of its current live Kickstarter campaign, the team is offering a pledge reward allowing backers to donate £15, thus releasing a full letter writing kit and accessory pack to be sent to a Scottish school, college, youth club of their choice.

The kit is just one of 13 reward choices ranging between £3 – £5,000 for backers who wish to support the publishing of a book of letters written to the future of Scotland – in turn supporting new and existing Scottish literacy initiatives on the success of the £10,000 funding target.

Speaking of the burgeoning relationship between Dearest Scotland and Scottish schools, project manager Cat Cochrane, said: “We’ve received increasing contact from teachers who see the value of Dearest Scotland’s ideals and wish to engage their pupils with the project.

“One such example is Modern Studies teacher, Fiona Taylor, who just this week is giving her pupils at George Watson’s College in Edinburgh, the chance (see here) to discuss the merits of people of all ages writing a letter to the future of Scotland and what can be learned from each contribution.”

Dearest Scotland’s Kickstarter campaign will run until Sunday 15th March, after which a successful funding result will see a print run of 2,000 book copies of letters, each penned in the past year by both Scots and non-Scots, all under the theme of writing to the future of the country.

The Dearest Scotland team hopes the project will retain a legacy in Scottish classrooms once it culminates with an exhibition in Scottish parliament in the autumn.

In an invitation to educators, Cat added: “We welcome contact from all Scottish teachers and principals who wish to use Dearest Scotland’s digital and non-digital tools in their classrooms.”

“We hope that in time Dearest Scotland as a platform encouraging citizen participation and open democracy for all ages and backgrounds can be a developed part of Scottish educational curriculums.”

By clicking here, find out more on how to donate a Dearest Scotland letter writing kit to a school, college or youth group of your choice, along with other reward options.

Contributions to the catalogue of letters already written to the project can be made here.

The Dearest Scotland team can be contacted at: hello@dearestscotland.com

We Are Snook · Education and training · Scotland-wide