Media Release: Justin Moorhouse to deliver a stand up comedy romp in Scotland 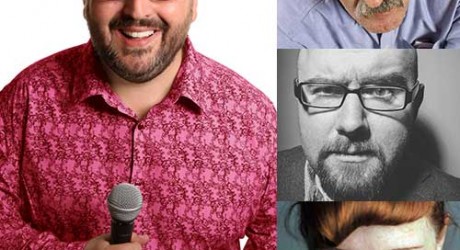 JUSTIN Moorhouse will be in Glasgow and Edinburgh this weekend doing what he does best -no-frills big-hearted stand-up comedy. Audiences of Gilded Balloon Comedy at Drygate (Friday 6 March) and Gilded Balloon Comedy at The Studio (Saturday 7 March) will be treated to a stand-up romp from one of the brightest stars working on the British comedy circuit today, a master of his craft.

With his exuberant, larger-than-life personality and cheeky northern charm, Justin Moorhouse will headline both comedy clubs delivering his compelling and greatly entertaining rants and observational musings about everyday life.

‘It’s the comedy of domesticity, comfortable marital strife and childminding that speaks to people of their own experience and giving voice to lives of low level disgruntlement.’ – Chortle.

He won Celebrity Mastermind in 2011, with Les Dawson as his specialist subject. He also wrote and appeared in the Radio 4 sitcom Everyone Quite Likes Justin.

Moorhouse will be joined by Irishman, Michael Redmond, most famous for his character Father Stone, one of the most memorable and ill fated creations of C4’s classic comedy, Father Ted. With his shock of white hair, droopy black moustache and a face that the phrase hangdog expression was invented for, Redmond is a true master of the deadpan comedy. His natural gifts of precision timing and outrageously well-crafted material will his audiences in hysterics without him uttering one word.

Also on the bill at both clubs will be Glaswegian comic, Scott Gibson, who burst onto the comedy scene in 2010 and was described by Capital FM Breakfast Host, Des Clarke, as ‘The Best Act to emerge from Scotland in Years’. A storyteller at heart, Gibson mixes a conversational style with his own unique brand of dark humour. This ability to push boundaries and control any room he plays, has allowed him to move up the ranks quicker than many before him.

Keeping the boys in check and making sure everyone has a great time at both ends of the M8 will be compere for the weekend Katie Mulgrew, the Lancashire comedian who really likes making people laugh.

The Gilded Balloon at The Studio at the Festival Theatre is a brand new comedy club for Edinburgh. It is staged in the exciting, intimate and flexible studio space, perfectly suited to stand up, and features a line-up of popular Scottish, UK and international comedic talent.