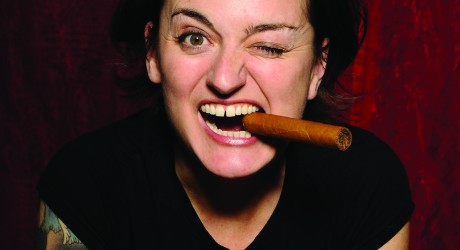 In perfecting the recipe for the ultimate in Friday night entertainment, Edinburgh’s Gilded Balloon have programmed strong, intelligent comedy with a quality blend of up-and-coming comedians and the finest established comics on the UK circuit; with Vikki Stone, Stephen Carlin and Zoë Lyons headlining gigs on 13, 20 and 27 March 2015, respectively.

Her unique mix of stand up and exuberant musical comedy has made her one of the fastest-rising stars of British comedy.

Vikki will be joined on the bill by the Australian absurdist, Benny Boot, who playfully reshapes reality around his own eccentric imagination. “He may come from down under, but we should be loath to let them have him back” (The Guardian).

Says a spokesperson: “Her tales of everyday life growing up in deepest, darkest Lanarkshire as a five-foot lesbian, a wasted youth spent smoking fags, playing video games, watching Glasgow football and being terrified by Crimewatch UK can bring a tear to a glass eye.”

The spokesperson add: “Stephen Carlin, a delightfully deadpan Scot, has the demeanour of a man that life has handed out gifts with one hand and taken them away with the other.

“Performing regularly on the UK circuit and at the Edinburgh Fringe, he has earned critical acclaim, accolades and a growing fan base, with his original and insightful writing style and accomplished delivery.

“From his sartorial elegance to his in-depth and hilarious knowledge of international snooker, Carlin’s performance takes his audience into the mind of a passionate obsessive.”

The spokesperson continues: “Joining Stephen Carlin on the Drygate stage will be Glaswegian newcomer, Chris MacArthur-Boyd, who was recently described by the Gilded Balloon’s Karen Koren as a hybrid of Ronnie Corbett and Michael McIntyre.

“His quality gags have propelled up the rankings with finalist spots in the So You Think You’re Funny and Scottish Comedian of the Year competitions in 2014.

“Since his first stand-up performance in January 2010 Glasgow comic, Chris Conroy has been to the UK’s major cities and carved a reputation as a comic that just wants to make audiences laugh and help them to leave with a grin on their face – a perfect objective for the Drygate compere for the night.”

Headlining the final Drygate Glasgow Comedy Festival night is Zoë Lyons, a highly sought-after act on both the national and international circuit. Taking a sideways view of life, picking out the many absurdities and turning them into hilarious routines that she delivers with tremendous energy, Zoë draws on her acting skills to provide a kaleidoscope of voices and faces throughout her act.

She also demonstrated to the nation her ability to laugh in the face of adversity, as a contestant on ITV’s ‘Survivor!’ where she ate a rat and lived to tell the tale.

Joining Zoë on this strong line-up is Davey Connor, a fast-rising Scottish comic.

Continues the spokesperson: “Following the success of his first gig in 2008, he now performs at all the major clubs around the UK. Davey’s likeable and laid-back style has made him a popular warm-up act, having provided tour support for Daniel Sloss, Jenny Eclair and Russell Kane. He has an assured, calm and personable stage presence with musings about his upbringing, relationships, air travel, superstition, buying lingerie and death.

“Opening the evening’s entertainment will be Irish musical comedian Aidan Strangeman, who was crowned the winner of leading stand-up comedy competition So You Think You’re Funny? in 2014.

“As compere for the evening 6’5” powerhouse, Scott Agnew’s easy-going, laid-back delivery and friendly approach to stand up will lull the Glasgow audience into a false sense of security before he spins yarns of general misadventure that will both shock and have them laughing uncontrollably.”