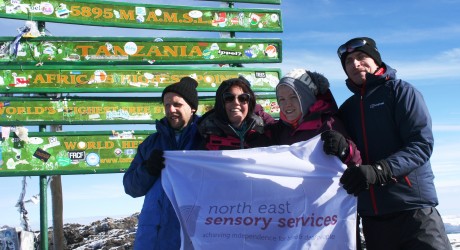 TWO inspirational workers from an Aberdeen-based charity, which provides sensory services for blind and deaf people in the North-east of Scotland, are in the running for a prestigious national adventurer award.

Neil Skene and Leona Glennie who both work at North East Sensory Services in Aberdeen have been shortlisted for the National Adventure Awards, taking place in Glasgow in on 18th March.

NESS, which has premises in Aberdeen, Elgin and Dundee provides information, equipment, social care and employment support for over 4,500 in the North-east.

The charity, which started in 1879, is the only organisation in Scotland to provide fully integrated support for both blind and deaf people under one roof.

Fundraising co-ordinator at NESS, Neil, who has been blind since he was a teenager, and administrative assistant, Leona, who is deaf and blind, have been nominated for the prestigious award following their inspirational trek up Mount Kilimanjaro, in June.

The duo decided to take on the adventure as a personal challenge and climbed Africa’s highest peak in six days with the help of colleagues Diana Daneels and Andrew Douglas, as well as interpreters and friends, raising almost £18,000 for the charity.

Despite not being able to see, Neil, made his way up the 19,341 ft mountain, with the aid of four friends from Inverurie who were supporting him.

The trek was especially challenging for Leona who has a small amount of sight, which enables her to communicate through limited sign language. The final leg of the climb was completed at night so that the group could be at the top for sunrise; however, this meant that Leona was unable to communicate at all.

Leona put together a video blog of her journey, which can be viewed http://youtu.be/xt9pNcR8k1A.

Graham Findlay, chief executive of NESS said: “Neil and Leona are a tremendous asset to NESS through their work to help blind and deaf people of the North-east.

“However, climbing the highest free-standing mountain of the world is beyond the call of duty.

“They are both adventurers at heart and to take on this incredible challenge demonstrates the dedication of the staff and volunteers of NESS.

“We are delighted that they have been shortlisted in the National Adventurer Awards as they both show that having sight or hearing loss does not have to prevent you from setting goals and achieving them.”

Fundraising co-ordinator, Neil, said: “Leona challenged me to climb Mount Kilimanjaro after she completed her sky-dive. I have met some truly inspirational people through my work at NESS and being nominated for the National Adventurer Award is a real honour.

“We are delighted to be representing the North-east in this prestigious event.”

North-east Sensory Services (NESS) promotes the needs of people with a sight or hearing loss.

Issued by Frasermedia Ltd on behalf of NESS