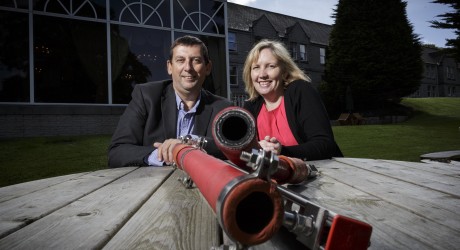 AN award-winning specialist North-east oil and gas industry fire safety protection company is celebrating after reaching the final stages of the Elevator Awards 2015.

Blaze Manufacturing Solutions, which is headquartered in Blaze House at Laurencekirk, has been named as a finalist in two categories of the prestigious business awards, which is run by Elevator, along with headline sponsors RBS – Ahead For Business.

The company, which won the Business Success Over Three Years title in last year’s competition has been selected as a contender in The Grampian Award for Innovation in recognition of the development of its Flameshield 300 Flexible Piping system. It is also a finalist in the Employer of the Year due to its continued commitment to the development of its employees.

Blaze, which was established in 2006 by Howard and Ann Johnson, currently employs 32 full-time members of staff, including design and engineering teams, procurement, and business support personnel, and 67 sub-contractors working from its Laurencekirk HQ.

Since its establishment the company has continued to secure contracts with major names in the industry, resulting in a 500 per cent growth in turnover since 2012 to £19million this financial year.

Blaze managing director, Howard Johnson, said: “We are delighted to reach the finals of the awards again this year. We have pioneered the development of the Flameshield 300 Flexible piping system, which is an alternative to the traditional hard pipe systems that are utilised throughout the oil and gas industry and fire protection industries, and getting to this stage of the competition in the innovation category gives this unique product the recognition it deserves.

“We are also delighted to reach the finals of the Employer of the Year category. The development of our staff is also a top priority as all our team play an instrumental part in helping to grow the company, putting Blaze in a perfect position for continued success throughout the year.”

Professor Gary McEwan, chief executive of Elevator, said: “Reaching the final stages of the awards offers these individuals and businesses the perfect opportunity to demonstrate why they are the best in their chosen field.”

The Elevator Awards, which are in their 16th year, include young up-and-coming businesses, family owned enterprises and long established companies across the North-east.

The black tie awards ceremony will be held at the Mercure Aberdeen Ardoe House Hotel and Spa on Thursday 25 June 2015.

Issued by Frasermedia Ltd on behalf of Elevator.