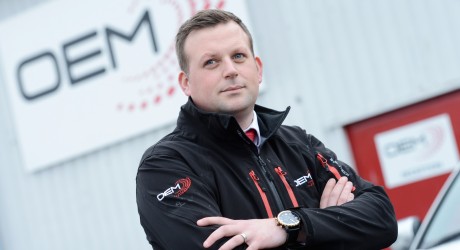 AN Aberdeen-based oil and gas services company is celebrating after being recognised in the finals of the Elevator Awards 2015 in two categories.

OEM Diesel Products, which is situated in the Altens Industrial Estate, Aberdeen, has been named as a finalist in the Business Success Under Three Years category of the awards, organised by Elevator and headline sponsors RBS – Ahead for Business.

OEM’s managing director, Barry Park, 32, is also a contender in the Emerging Entrepreneur category of the competition in recognition of his work to make the company an established name in the industry.

Mr Park launched the specialist firm in 2012, to provide engine services and spare parts procurement specifically for the oil and gas and marine services sector. He started his career as a deep-sea fisherman, before going on to work as a service engineer, and then held a number of senior positions at large multinational company’s in the oil industry.

Using the wealth of experience he had gained over the years in his varied roles, the young entrepreneur made the brave decision to establish the specialist firm.

Since its establishment, the company has continued to secure contracts with major names in the industry, and recently signed a co-working agreement with the IPU Group. The partnership has allowed OEM to launch a pioneering fuel cleaning system which is designed to prevent contaminated fuel causing major down stream problems of power failures on oil and gas platforms.

To cope with demand from clients, the firm has also opened a new office in Perth, Australia, in the heart of the oil and gas district, close to major names in the industry.

Managing director, Barry Park, said: “It was a huge risk to set up OEM, which would be competing with well-established, multi-million pound companies in the industry; but also an even bigger opportunity which I had to pursue.

“A crucial part of the development of the company has been getting the business name, services and quality out in to the market, and I have worked tirelessly with my dedicated team to make the business a success.

“The company has continued to go from strength to strength, and being recognised in the finals of the awards shows that grasping the opportunity to establish OEM outweighed any initial risks.”

Issued by Frasermedia Ltd on behalf of OEM Diesel Products.