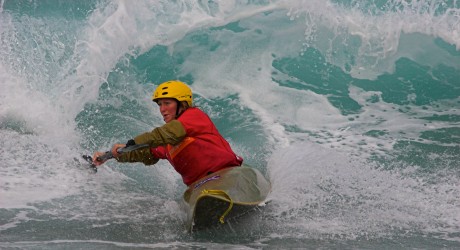 AFTER years of crippling pain, world surf kayak champion, Tracy Sherrington, from Aviemore, has finally found some relief – thanks to a hot tub.

Tracy, who was world surf kayak champion in 2001 and 2007, has recently installed a state-of-the-art hydrotherapy tub, which has helped to dramatically ease her pain and give her increased movement.

After a career involving being a skiing instructor, a white water, surf and sea kayak coach and competing in surf kayaking, Tracy became Scottish champion and world champion in the 90s.

However, after a serious skiing accident in 1996, followed by a life-threatening car crash in 1999, Tracy suffered permanent spinal damage which caused her immense pain.

Tracy said: “I had terrible pain in my neck, back and pelvis and began to have unbelievable headaches and unexplained nerve pain in my legs, hands, feet and face.”

Tracy, who worked as senior lecturer in Outdoor Education and Coaching at North Glasgow College, was advised by her chronic pain consultant, doctor and also her occupational health specialist at work to take time off to receive treatment and recover from her injuries.

“I knew I should have stopped, but the sea, snow and teaching meant everything to me, my husband and all of my friends.

“I would wear a neck brace until I got to the river’s edge then take it off. However, I was eventually convinced to take nine weeks off – and was never able to go back to work again.”

Begins a spokesperson: “Specialists prescribed strong medications for Tracy to help her cope with the chronic neuropathic nerve pain; however, the pills affect her memory which in part prevents her from working.”

Continued Tracy: “Not being able to work – and most days not getting out at all, meant my life changed dramatically.

“The medications help, but it is not a long-term solution. I want to get back to the sea and to coaching! I am determined to relieve my pain without mind-numbing pills, which is why I looked into getting a hydrotherapy tub.

“I had read about hydrotherapy really helping people with sports injuries so I wanted to get a tub with strong jets which could be adjusted to the individual areas which needed massaging.

“Within weeks of the tub arriving, my osteopath was surprised at the increase in movement, and, for the first time in a long time, I can see a light beginning to flicker at the end of the tunnel.”

Adds the spokesperson: “Hot water stimulates the immune system and increases circulation, helping to relieve the body of toxins. By soothing nerves, hot water calms and relaxes the body.

“Hydrotherapy baths have been used for water births as it relaxes the mother, reduces blood loss and birth pain.”

“The water protects limbs whilst they are healing. Rehabilitation in water enables the brain to connect again to the muscles and learn how to move properly – without causing any further injury or pain. Athletes are able to progress from hardly walking to running in water, to eventually exercising again on dry land.”

Jane Tadman, from Arthritis Research UK, said: “Hydrotherapy is used as a treatment method for a wide range of conditions including osteoarthritis, back pain and psoriatic arthritis, as well as treating sporting injuries.

“Scientific studies have shown that hydrotherapy can improve strength and flexibility of the affected joints whilst also ensuring general fitness levels are maintained for those living with various types of arthritis. In general, hydrotherapy is one of the safest treatments for arthritis and back pain.”

Highland Home Centre manager, Kim Clark, said: “Immersing yourself in a heated pool can help muscles to relax, reduce pressure in joints and, as has been the case for Tracy, ease pain. People with arthritis, muscular dystrophy and victims of accidents can enjoy long sought-after relief in the 34-degree temperatures”.

But there are no hot tub parties for Tracy, she said. “The tub is mine! Nobody else is allowed in – special invite only. It gives me amazing relief so it’s not just a fun addition to the garden – it’s my rehabilitation studio!”

Issued by Frasermedia Ltd on behalf of Highland Home Centre.

And check out too twitter.com/allSportsPR.