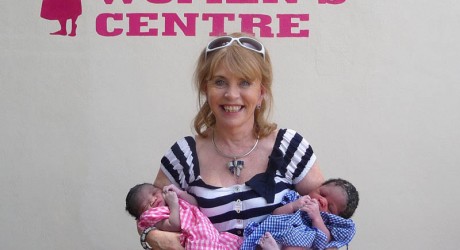 OSCAR-winning actress, Meryl Streep, is narrating a documentary highlighting the efforts of Scottish philanthropist Ann Gloag and her charity to improve maternal health in Africa.

‘SHOUT GLADI GLADI’, to be released later in the year, documents the efforts of Stagecoach co-founder, Ann Gloag, and her Freedom From Fistula Foundation as they work with some of the world’s most destitute women.

The feature-length film, the first documentary to be narrated by Meryl Streep, focuses on women’s health in Africa with a particular emphasis on fistula – a common, debilitating condition which renders women and girls injured after childbirth.

Speaking about the documentary, Meryl Streep said: “This powerful film attests to the igniting power of one woman, Ann Gloag, to set in motion hundreds of helping hands, doctors, nurses, caregivers, family and friends, to resuscitate the health and status of victims of fistula, and to give them back their lives.”

The film will also feature Melinda Gates and Wole Soyinka, the first African to be honoured with a Nobel Prize.

The Freedom From Fistula Foundation works to eradicate fistula by improving access to good maternity care, as well as training doctors and midwives, and providing free medical care at their facilities in Sierra Leone, Kenya and Malawi.

In addition to providing health services, the Foundation is also focused on empowering women economically and socially.

Speaking about the upcoming documentary, Ann Gloag said: “We are truly honoured to have Meryl Streep support our film and our work. Her involvement will help shine a light on the ongoing, unnecessary suffering of millions of women and girls living with fistula today, as well as the enormous amount of work still needed to improve maternal healthcare across Africa.

“But the film is also about hope, as fistula can be cured in the majority of cases and can be prevented when good maternity care is available. Women and children need not die in childbirth and we all have the power to help.”

‘SHOUT GLADI GLADI’ is being produced by Emmy-nominated documentary maker, Adam Friedman, through his company Vertical Ascent, with Ann Gloag as executive producer.

Speaking about the project, Adam Friedman said: “’SHOUT GLADI GLADI’ is a story about hope for a unique group of women and the extraordinary people who are helping them have a brighter future.”

Director of Operations and Communications

ABOUT FREEDOM FROM FISTULA FOUNDATION

The Freedom From Fistula Foundation was established in May 2008 by one of the UK’s most successful business leaders, Ann Gloag OBE, co-founder of the international transport group Stagecoach plc.

The charity is dedicated to helping women and girls who are injured and left incontinent following prolonged, obstructed childbirth – by providing free surgical repairs for patients already suffering with fistula, as well as maternity care to prevent fistulas from happening at all.

The three main projects are in Sierra Leone, Malawi and Kenya and more than 90 per cent of staff being nationals who are supported by international staff and volunteers where necessary.

The charity’s international Ambassadors include the President of Liberia, Ellen Johnson-Sirleaf and former President of Malawi, Dr Joyce Banda.

ABOUT ADAM  FRIEDMAN AND VERTICAL ASCENT

Vertical Ascent founder and president, Adam Friedman brings over 22 years of entertainment industry experience to the company. An award-winning filmmaker and television producer, Friedman began his career directing a documentary entitled Wolves in Winter, which went on to receive two Emmy nominations. Friedman’s next project, Color Me Blue, about the NYPD and its many heroes, won him his first Emmy.

Friedman has also produced and directed a multitude of biographies for A&E that has included figures as diverse as Kevin Costner, Dolly Parton and LL Cool J. Adam’s bio on John Travolta tripled A&E’s viewership and went on to receive Emmy nominations for best non-fiction series and best director. He has also produced hundreds of hours of non-fiction programming for Discovery, The History Channel, HBO and Spike TV.