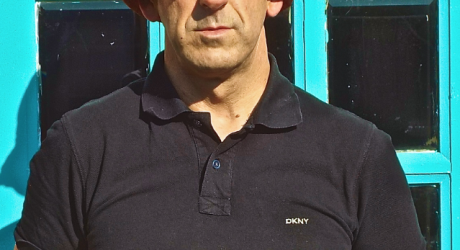 Says a spokesperson: “The opening night activities, taking place at Glasgow’s Mitchell Library, will be headlined by Irvine Welsh – which is fitting given that Graham has been described as the natural heir to the popular and controversial writer.”

Oh Marina Girl - published on 9 April by Contraband, the crime imprint of Glasgow’s Saraband Books – is a labyrinthine mystery already described as having “all the makings of a cult classic” by Alistair Braidwood in his ScotsWhayHae blog.

Meanwhile, crime writer, Douglas Skelton, found Oh Marina Girl to be “the most fun you can have with cult content without actually shaving your head and holing up in a compound in Idaho”.

The novel introduces us to the claustrophobic editor of a newspaper’s letters page.

He receives a note from a kidnapper informing him that “intolerance will not be tolerated” and that a hostage will be executed unless the editor arranges for a letter to be published on the front page of the next morning’s paper.

So begins the narrator’s tale, within which we encounter strange characters – such as Chris The Crossword Compiler and Mark Twain (or at least his namesake) – and hear of an enigmatic organisation of moral vigilantes called The Amino.

But who is the kidnapper?

And why would he/she wish to pass a death sentence on the narrator?

Graham Lironi has been described as the “bad boy of Scottish fiction” by The List magazine. His first two novels, The Bowels of Christ and Candyfloss Martyrs, won plaudits for their uncompromising style and provocative subject matters.