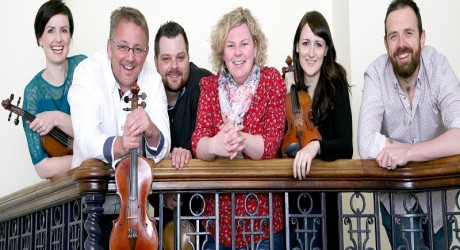 ONE of the longest-running folk festivals in Scotland is reaching a significant milestone in June this year, having started back in 1976.

For its 40th birthday, Keith TMSA Festival is planning its biggest celebration to date, with top folk group, Blazin’ Fiddles, as the headline act.

Joining them is a mix of individuals and groups who have performed at the Festival over the past 40 years and a couple of new faces.

“We have a fantastic list of guest artists coming to perform during the weekend – a real mix of singers and musicians, experience and youth.

“It is great that the Festival has managed to reach this milestone and is testament to all the past and present committee members, volunteers, performers, audiences and sponsors that we have managed to get here.

“I’m sure that many folk will have photos, posters, programmes or other memorabilia and we would love to see it for a special 40th Festival display. We invite folk to come along for what will be a fantastic weekend of music and song.”

The Festival is also looking for any photos or memorabilia that members of the public have from the past 39 festivals to create a display during the week before the event.

Any items can be e-mailed to keithfestival@gmail.com or handed in to The Banffshire Herald.

Please ensure you enclose your name and address so that they can be returned.

Tickets will be available soon from Mither Tongue, Mid Street, Keith and also from Sandy McCombie on 01542 882638.

The Festival has been helped to get Blazin’ Fiddles to Keith with the sponsorship of Alex Grant & Co.

The group will headline the Saturday night concert in the Royal Hotel (sponsored by Strathisla Distillery).

Keith TMSA Festival is run by the Keith Branch of the Traditional Music & Song Association (TMSA) of Scotland, set up in 1966.

The TMSA is a membership organisation whose core aim is to foster and promote Scotland’s unique musical traditions.

Its branches provide opportunities for grassroots participation by running festivals, ceilidhs, concerts, workshops and competitions – sustaining the specific cultural traditions of their area, as well as those of Scotland.