Media Release: Acclaimed World War One play to be performed at Edinburgh Festival 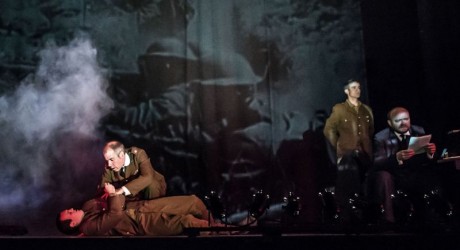 A GAELIC World War One theatre production that portrays the grief and guilt of a headmaster who encouraged pupils to fight in the conflict is to be performed at the Edinburgh Festival Fringe in August following a successful nationwide tour.

Sequamur will be performed at the Assembly Rooms between August 18th and 24th following a critically-acclaimed series of performances in six locations across Scotland last month.

Created by Isle of Lewis writer, Donald S. Murray, Sequamur (Latin for ‘let us follow’) tells the poignant story of William J. Gibson, the headmaster of the Nicolson Institute in Stornoway between 1894 and 1925.

An enlightened and charismatic teacher, Gibson believed in the power of progress through education. He genuinely believed that service in WWI would bring a new enlightened age to Britain but endured personal turmoil following the death of 148 of his own pupils.

The play is being staged by Pròiseact nan Ealan (PNE) | The Gaelic Arts Agency, with funding provided by Creative Scotland for the run of performances in Edinburgh. Bòrd na Gàidhlig have also financially supported Sequamur.

Erica Morrison, chief executive of Pròiseact nan Ealan, said: “There has been a wonderful reception for Sequamur for the national tour last month which built upon the initial show staged in An Lanntair in Lewis in June 2014.

“Interest in the play and the difficult story of William J. Gibson has grown significantly as the tour progressed and we are delighted – with the support of Creative Scotland amongst others – to be able to take Sequamur to the Edinburgh Festival Fringe in August.

“This will put Sequamur in front of an international audience and allow the work of Donald S. Murray and the rest of the production team and cast to be more widely appreciated.

“Whilst the story of William Gibson is unique, we believe its narrative has universal resonance across Britain and beyond, where the realities of what young men faced at war was not what had been portrayed to them before their departure.

“There are other regions and communities we would like share the Sequamur story with in future months but we are immensely grateful to Creative Scotland and all our other partners for their support in allowing the play to be staged in Edinburgh in August.”

The 60-minute play is performed in Gaelic but is designed to be fully assessable to all, with live simultaneous translation via headphones for people who do not speak Gaelic.

The most recent performances – in Glasgow, Edinburgh, Oban, Fort George Chapel, Skye and Aberdeen – included a number of community engagement activities with workshops in Gaelic or English focusing on new writing and performance for communities and senior secondary schools.

Pròiseact nan Ealan (PNE), The Gaelic Arts Agency, was established in 1996 as a company limited by guarantee and a registered charity. PNE is the lead strategic body in Gaelic arts; it has a dual role as a Gaelic arts production company and networking infrastructure body and has a strong track record in delivering successful, high-quality, and award-winning arts projects. PNE is working nationally and internationally across diverse art forms on projects that have multiple funders and are at varying stages of development.