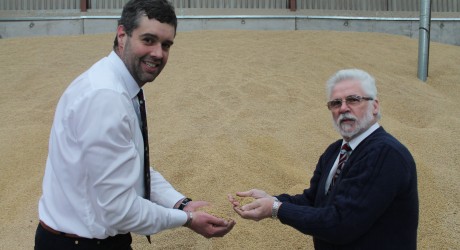 A LEADING Scottish recycling company is helping farmers get the most from their soil with an organic alternative to traditional fertilisers as they prepare to plant this year’s crops.

Keenan Recycling, based at New Deer in Aberdeenshire, produces around 60,000 tonnes of compost per year, which is made from recycled organic materials collected from businesses across the North and North-east of Scotland.

Says a spokesperson: “Using published statistics, Keenan Recycling calculates the use of 30,000 tonnes of compost annually by their agricultural customers can result in a collective saving of nearly £500,000 in bagged fertiliser and liming costs every year, as well as maintaining and improving the fertility of the land they farm.

“There is also a huge saving to Aberdeen City, Aberdeenshire, and Moray Council in the diversion of organic waste away from landfill.”

The specialist firm currently delivers compost to 80 farming customers mainly within a 30-mile radius of the firm’s rural base, including farmer Peter Chapman of Redbog Farm at Strichen, Aberdeenshire.

Mr Chapman has been using Keenan’s products for six years and has noticed a huge difference in the quality of his crops and financial savings, which are key in the current tough climate.

He said: “We have used approximately 7,250 tonnes of compost and now take around 3,000 tonnes annually. Compost is a slow-burning product where you will not see an immediate impact like some mucks or slurries but it is slowly building good soil structure and biology which will produce real benefits over the coming years.

“We have widely used various muck products in the past so the impact is not so obvious on our land but the amount of premium compost we apply provides all the phosphorus and potassium we need, which gives a real financial benefit to our business.”

Keenan Recycling chair, Mel Keenan, said: “Our customers report yields of more than four tonnes per acre of barley and savings of £50 per hectare on lime alone.

“Savings have also been reported on bagged fertiliser particularly potash and trace element sprays such as magnesium and manganese, while our compost is now approved by Quality Meat Scotland for all combinable crops, forage crops fodder crops and for spreading on grass for grazing.

“Farmers using our compost regularly are now reporting their land to be in good heart with organic matter levels and optimum Nitrogen-Phosphorous-Potassium (NPK) levels.”

Keenan Recycling processes around 60,000 tonnes of organic waste every year saving customers nearly £4million in landfill tax, which results in a net saving of around £2.5million per annum when composting costs are taken into account.