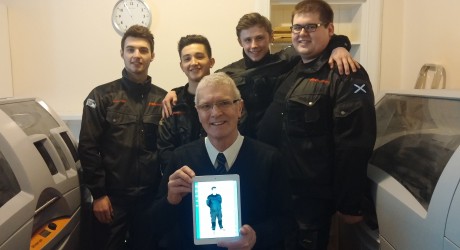 A GROUP of Forth Valley College students have ‘morphed’ with a Falkirk company in an exciting and innovative state-of-the art 3D project.

A team – comprising two Engineers of the Future and two Machinist Modern Apprentices (MA) – had previously chosen to design and produce a model of a V12 engine block from scratch as part of a Creative Learning Action Community (CLAC).

Finlay Miller (19) from Balmullo, St Andrew’s and Lewis Hunter (18) of Glenrothes (both MAs) and Engineers of the Future, Craig McGuinness (17) of Larbert, and Ross Jackson (26) of Dunfermline – all employees of FMC Technologies – were the driving force behind the initiative.

They also approached BA Digital Media students Samantha Dove and Ryan Louch from the college’s Creative Industries Department to ask if they could film the process – from planning right through to production – and they jumped at the chance to video the project.

John Paterson, managing director of Morphotechnics, who is a BSc in Technological Education graduate from the University of Stirling, said: “We were delighted to work with the students using our 3D printing technology to create the model of the engine block and also a Morpho Mini Me statue of Ross Jackson from the engineering team.

“We are extremely pleased to have a working partnership with the college and I was particularly impressed with the students who were all so polite, enthusiastic and had a professional attitude. They all really enjoy what they do with FMC Technologies and said they enjoy the courses they are on at the college.”

He added: “It was an interesting project and we would certainly be looking to work with the college again in the future on various collaborations.”

FVC engineering lecturer, Gary Paterson (no relation), who had a hands-off mentoring role on the project, said: “This project worked really well and the students – who all also work for FMC Technologies based in Dunfermline – led on it from the start. They came up with the idea for the V12 engine and linked up with students from the Creative Industries Department very well.

“It was great to work with John at Morphotechnics and the technology to produce 3D printing was a fantastic help with the project. It is certainly something we will be using more of in the future.”

FVC Creative Industries lecturer, Emma MacNair, said: “The Morphotechnics 3D printing collaboration between Creative Industries and the Engineering Department, has been a great success. Samantha and Ryan were eager to be involved and enjoyed the live aspect of the project.

“Working for clients and collaborating with others, is a huge part of working within the Creative Industries and has been invaluable to the student’s growing skillset and interpersonal skills.”