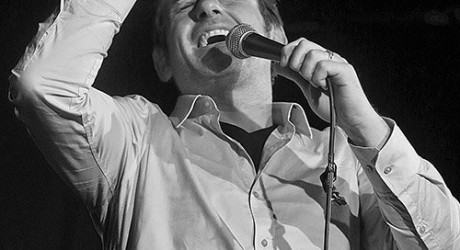 Stade will be joined on stage by the up-and-coming Glaswegian comedian, Christopher MacArthur Boyd, and the original and inventive Irish stand-up, Gráinne Maguire.

Compering both nights will be the funny and dependable Ray Bradshaw, a double Scottish Comedian of the Year finalist.

Stade, the Edinburgh-based Canadian émigré, is an one-of-a-kind comedian, a natural and exuberant performer with a passion for storytelling and a flair for uncompromising humour.

With a genuine flare for observation and inspired improvisation, he delivers quality satire, passion and expertly-crafted mayhem into every set.

With his magnetic stage presence, irrepressible charm and free-thinking philosophy, Stade has earned a reputation as one of the most original and exciting stand-up talents around; a true master of his craft.

He has stormed BBC’s Live at the Apollo and Michael Mcintyre’s Comedy Roadshow, as well as Ch4’s Comedy Gala.

“He crams in quality laughs, steering clear of cheap gags. It’s no wonder that he is considered a superstar of the stand-up circuit.” – Daily Record

As a stand-up comedian, Gráinne Maguire is a breath of fresh air.

She is not only original and inventive with a subversive twist she is also an excellent topical joke writer, combining a political nerd’s knowledge of current affairs with an encyclopaedic knowledge of the love lives of celebrities.

Her deep reserves of excitable energy, along with top-quality material –  that includes the Bronte sisters, reclaiming big bellies for the sisterhood, annoying Londoners, and fancying Ed Milliband – make her an unique voice in comedy.

It can be said that Christopher MacArthur Boyd is up-and-coming, in as much as it would be impossible for him to go downhill.

He still lives at home with his mum and dad and is unemployed.

However, he was a finalist in both the notorious So You Think You’re Funny? competition and the Scottish Comedian of The Year Awards in 2014.

Hailing from Glasgow, Ray Bradshaw, compere for both the Glasgow and Edinburgh club nights, has quickly gained a reputation as one of the funniest and most dependable acts on the Scottish comedy scene, all while still in his early 20s.

A double Scottish Comedian of the Year finalist, Ray has travelled the length and breadth of the country telling jokes to anyone that will listen and has produced stand-out festival performances at T in the Park and RockNess.

The Gilded Balloon at The Studio at the Festival Theatre is a brand new comedy club for Edinburgh.

It is staged in the exciting, intimate and flexible studio space, perfectly suited to stand-up, and features a line-up of popular Scottish, UK and international comedy talent.