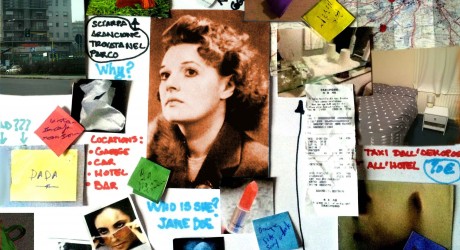 A novel by Muriel Spark

Adapted and directed by Laurie Sansom

Opening performance 18 June at 7.30pm at The Lyceum, Edinburgh

“You look like Red Riding Hood’s grandmother. Do you want to eat me up?”

ADAPTED and directed by the National Theatre of Scotland’s artistic director, Laurie Sansom, The Driver’s Seat is the first theatrical presentation of Muriel Spark’s psychologically-thrilling 1970 short novel which plays at the Lyceum Theatre, Edinburgh and tramway, Glasgow from 13 June 2015.

Says a spokesperson: “In its first adaptation for the stage, Lise’s journey to an unnamed European city and the ever-curious people she encounters, merge with the urgency of a police incident room on the hunt for a killer.

“This is one of Spark’s most unique, gripping and disturbing books, telling the story of one woman’s mission to leave her mark on a world that is becoming increasingly alien to her, and asking whether we are ever in control of our lives.

“The Driver’s Seat is also a taut thriller and a darkly comic tale that displays Spark at the height of her powers.

“The Driver’s Seat was nominated, posthumously, for a ‘Lost Man Booker Prize’ and was also adapted into 1974 film, Identikit, starring Elizabeth Taylor. Muriel Spark referred to it as her favourite novel.”

The spokesperson continues: “The production is designed by Ana Inés Jabares Pita, overall winner of the 2013 Linbury Prize, the UK’s most prestigious award for stage design, offering graduating designers the unique opportunity to work with some of the country’s leading theatre, opera and dance companies.

“The prize is sponsored by the Linbury Trust, one of the Sainsbury Family Charitable Trusts.”

Laurie Sansom adapts and directs. This is his first production for the National Theatre of Scotland after the success of his productions of Rona Munro’s epic historical trilogy, The James Plays in Edinburgh and London, in 2014. He previously directed an acclaimed production of Muriel Spark’s The Prime of Miss Jean Brodie at the Edinburgh Festival Fringe in 2009.

“I’m thrilled to be adapting the work of one of Scotland’s finest writers, and The Driver’s Seat is one of her most perfect and idiosyncratic books.

“It combines her razor sharp wit and crisp narrative voice with an enigmatic central figure that slips in and out of focus until its final, shocking conclusion.

“Capturing Spark’s voice on stage is always a challenge, but this has to be one of her most dramatic and mysterious stories, lending itself to theatrical reinvention.

“I’m proud that the National Theatre of Scotland can help to bring people’s attention back to her wonderful body of work and this book in particular.”

The National Theatre of Scotland is delighted to welcome back Morven Christie to play the central role of Lise.

She is an acclaimed actress on stage and screen known for her roles in BBC’s TwentyTwelve, ITV’s Grantchester and the film Young Victoria.

She previously appeared in Blabbermouth and Glasgow Scrapbook for the National Theatre of Scotland.

She will be joined by Michael Thomson who has previously worked with Laurie Sansom on Beyond the Horizon and Spring Storm at the National Theatre of Great Britain and known to TV audiences as Jonny Maconie in Holby City.

Sheila Reid (ITV’s Benidorm) will also be appearing in the instrumental role of Mrs Fiedke. Ryan Fletcher, who featured in the original cast of the National Theatre of Scotland’s Black Watch, and has since been known for his appearances on Limmy’s Show and in River City, will be joining the company alongside acclaimed Italian actors, Ivor Castiglione and Andrea Volpetti, and popular Scottish stage actor, Gabriel Quigley, whose previous work with the National Theatre of Scotland includes Rupture and The Enquirer and who has  extensively worked in theatre, TV and film including roles in Chewin’ The Fat, The Karen Dunbar Show and Rab C Nesbitt.

Muriel Spark, born in Edinburgh in 1918 was a prolific and highly-successful novelist. She also wrote plays, biographies and poetry.

Her personal archive is held by the National Library of Scotland.

Performance dates and times: Saturday 13 to Saturday 27 June at 7.30pm (Tues to Saturdays)

Performance dates and times: Thursday 2 to Saturday 4 July at 7.30pm and Sat 4 July at 3pm

The National Theatre of Scotland is dedicated to playing the great stages, arts centres, village halls, schools and site-specific locations of Scotland, the UK and internationally.

Central to this is finding pioneering ways to reach current and new audiences and to encourage people’s full participation in the company’s work.

With no performance building of its own, the company works with existing and new venues and companies to create and tour theatre of the highest quality.

Founded in 2006, the company, in its short life, has become a globally significant theatrical player, with an extensive repertoire of award-winning work. The National Theatre of Scotland is supported by the Scottish Government.  nationaltheatrescotland.com

Laurie is the artistic director and chief executive of the National Theatre of Scotland.

This is his first production for the National Theatre of Scotland after the success of his productions of Rona Munro’s epic historical trilogy, The James Plays in Edinburgh and London, in 2014. He directed an acclaimed production of Muriel Spark’s The Prime of Miss Jean Brodie at the Edinburgh Festival Fringe in 2009.

Previously, he was artistic director of the Royal & Derngate Theatre, Northampton. From 2002 to 2006, he was associate director to Alan Ayckbourn at the Stephen Joseph Theatre, Scarborough.

Laurie’s productions at the Royal & Derngate include The Bacchae, Blood Wedding and Hedda Gabbler, which were presented as The Festival of Chaos, as part of London 2012 Festival.

Other recent productions include Spring Storm and Beyond the Horizon which transferred to the National Theatre, London, and for which he received the 2010 TMA Award for Best Director, Frankenstein (with Frantic Assembly), The Duchess of Malfi and Follies.

He has directed for theatres around the UK including the Traverse, Birmingham Rep, Salisbury Playhouse, Lyric Hammersmith, New Vic, Stoke, West Yorkshire Playhouse and the National Theatre, London, where he directed The Holy Rosenbergs.

Ana is a graduate from MA Scenography at The Royal Central School of Speech & Drama 2012.

She has trained as a Fine Artist in Seville and in the Accademia di Belle Arti di Palermo. Her work includes an award-winning play Sappho… in 9 fragments (Best Design award – Ottawa Fringe Festival 2013).

Recently, she has been announced as Overall Winner 2013 of the prestigious Linbury Prize (for The Driver’s Seat) and as one of the Gate’s Jerwood Young Designers for 2014. Her last work, Idomeneus, has been selected by the Victoria and Albert Museum in London to become part of their archive.

Morven Christie trained at the Drama Centre. Her previous work with the National Theatre of Scotland includes Blabbermouth and The Tin Forest Opening Event. Other theatre credits include Festen (London’s West End), When You Cure Me (Bush Theatre), Romeo and Juliet, Much Ado About Nothing (Royal Shakespeare Company), The Cherry Orchard, A Winter’s Tale (Bridge Project, Brooklyn Academy of Music/Old Vic/World Tour) and Men Should Weep (National Theatre of Great Britain).  Her television work includes Oliver Twist, Lost In Austen, The Sinking of The Laconia, Hunted, TwentyTwelve, From There To Here and Grantchester. Film work includes The Flying Scotsman, Young Victoria, Shell and Lilting.

Ryan Fletcher trained at the Royal Scottish Academy of Music and Drama. His work for the National Theatre of Scotland includes Roman Bridge, The Wheel, Beautiful Burnout, Cockroach, Nobody Will Ever Forgive Us, 365 and The Wolves in the Walls. Ryan was a member of the original cast of the multi, award-winning Black Watch and toured with the production in the UK and internationally from 2006-2008.

Sheila Reid trained at Rose Bruford College. She spent seven years with Sir Lawrence Olivier’s National Theatre Company where she appeared in The Three Sisters, Hedda Gabler, The Crucible and The Beaux Stratagem.

She was a founder member of the Actors Company with among others Ian McKellen. For the RSC has performed in Romeo & Juliet, Richard II, ‘Tis A Pity She’s A Whore and King Baby.

New plays include: The Gentle Avalanche and My Mother Said I Never Should – both at the Royal Court Theatre, London – and  When I Was A Girl I Used To Scream And Shout at the Whitehall Theatre.

Film appearances include Touch, Brazil, Othello, Five Days One Summer and Sir Henry At Rawlinsons End. Television appearance include: Call The Midwife Christmas Special 2012, Lillie, Monarch Of The Glen, Midsomer Murders, Casualty, All Creatures Great And Small, The Sweeney, The Emmigrants and of course Madge in ITV’s award -winning Benidorm. She can also be seen in the Dr Who Christmas special and Doctors.

Michael Thomson trained at the London Academy of Music and Dramatic Art. His theatre credits include A Round-Heeled Woman for Riverside Studios and West End; The Syndicate at Chichester Festival Theatre; Beyond the Horizon and Spring Storm at the National Theatre; Accidental Death of an Anarchist, Arturo Ui, Haebeas Corpus, IPH, Journeys End, Of Mice and Men and The Three Sisters at Colchester Mercury Theatre; Amy’s View at Salisbury Playhouse/Northhampton Playhouuse; Love Play, Spring Awakenings and The Crucible at LAMDA; Mary Rose at Nottingham Playhouse Theatre and Romeo and Juliet as a Blood In The Alley tour. He was a regular on BBC’s Holby City, playing Jonny Maconie.

Gabriel Quigley studied English Literature & Theatre Studies at the University of Glasgow. She previously appeared with the National Theatre of Scotland in Rupture and Enquirer.

Andrea Volpetti graduated from the National Drama School of Rome, Silvio D’Amico, in 2001. He has worked throughout Italy with some of the most prominent Italian stage directors including Luca Ronconi and Federico Tiezzi. In 2014 he appeared in The Birds from Aristophanes and in Arthur Schnitzler’s The Green Cockatoo, both directed by Tiezzi.

With his own company he has won important national prizes such as Il Pemio Giovani Realtà Italiane 2013, Premio Young Station 2013, Giovani Direzioni MaMiMò 2014. He is also a collaborator with the Compagnia Lombardi-Tiezzi.