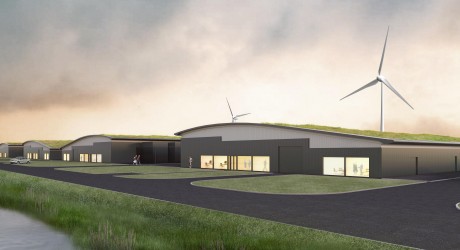 ONE of Scotland’s leading renewable energy investment management companies, Intelligent Land Investments, has unveiled an ambitious plan to create what is the believed to be the UK’s first partially self-powered data storage centre, with hopes of attracting to Scotland’s large technology-based companies – who utilise cloud-based sharing and storage, such as Google, Apple and Amazon.

A planning application has been lodged by ILI (Renewable Energy), in partnership with Greencat Renewables with East Ayrshire Council for The Blair Farm Data Centre, which will consist of a 10,000 sq metre data centre and a six-turbine wind farm in East Ayrshire, Scotland.

The proposed development will see an investment of £3m – £5m and create 15-20 new permanent jobs for the area, as well as 20-30 further jobs during construction.

“We live in a time when the global economy is highly dependent on efficient digital information systems without robust data security.

“The demand for reliable IT infrastructure around the world has been crucial in the massive expansion of data centre facilities globally.

“The Blair Farm Data Centre will be a landmark development for East Ayrshire – a data centre drawing a substantial amount of its energy from a green source.

“Scotland has been earmarked for some time as an excellent potential location for data centres as not only does it have a large highly-qualified pool of IT professionals and a much lower security risk in terms of terrorist activity and potential environmental crises, on average it is two degrees cooler than other major European data centre locations.

“This significantly reduces the effects on the environment of such a development as less energy is actually required to keep conditions stable at the centre due to the cooler climate.

“Scotland is also very renewable energy-friendly, and well on track to achieve the government target of 100 per cent of electricity supply from renewable sources by 2020.”

Issued on behalf of Intelligent Land Investments by Jill Creighton, Headline PR. For further information contact Jill on 0775 8622 552 or jill@headlinepr.co.uk

Intelligent Land Investments plan to build a sensitively designed data centre which nestles in an upland area with a cool climate that is ideal for data centres, as this enables ambient cooling systems to be used which are far more efficient than sole air-conditioning units.

The proposed location for the Blair Farm Data Centre is in an area earmarked by the Council for large-scale wind developments, and the design will consist of four small buildings with curved ‘green’ roofs, and constructed to the highest of standards in terms of energy efficiency and sustainability.

When fully occupied, the Blair Farm Data Centre could require up to 80GWh of electricity every year.

When the four buildings of the Data Centre are fully operational, the wind farm is expected to supply 34.1GWh of electricity to the centre over the course of the year, which is 42 per cent of the energy requirements.

This direct supply of green energy translates to significant carbon and cost savings when compared to a traditional Data Centre drawing its power directly from the National Grid.

It is estimated that, by using electricity directly from the wind farm, as opposed to drawing from the grid mix, a fully operational Data Centre at Blair Farm would save 13,700 tonnes of CO² per year, compared to a Data Centre that draws solely from the National Grid.

Data Centres have long since been a popular asset for large technology-based companies who utilise cloud-based sharing and storage of photos and music. They allow these large corporations to have a dedicated space to store and operate Information and Communications Technology (ICT) infrastructure that supports their business.

Given that global demand for data storage is expected to multiply ten-fold by 2020, they are very much the way forward for a wide range of organisations; financial institutions, universities, governments and telecommunications providers, to name but a few.

But data centres have a high energy requirement, with electricity expenditure typically making up three per cent of the running costs. As the number and capacity of these centres grows, it is becoming increasingly important to have them powered by clean energy sources. A 2012 Greenpeace study entitled, ‘How Clean is Your Cloud’, took an in-depth look at the sources of energy that were currently being used to power data centres, and they have since said: “If IT companies continue to rely on dirty sources of energy to power the cloud, the cloud itself will begin to have a measureable negative impact on our environment and our communities.”

The popularity, and discoveries like the above, have led to the environmentally-conscious multi-national companies entering into power purchase agreements with renewable energy producers to ensure the electricity used by their centres comes from clean sources.

With demand for digital services and cloud computing on the increase, so will the need to supply the sources with vast amounts of energy. Many companies are already e.g. upgrading their broadband connections to cope with the ICT infrastructure they utilise, and, in turn, this has created a big demand for data centres. However, few of the existing data centres have such readily-available clean, green energy on site.

The Blair Farm Data Centre would constitute a direct investment in the East Ayrshire area of between £3m and £5m, and the completed facility would be an attractive proposition to potential customers who would be expected to include financial institutions, public sector bodies and smaller, regional companies. During construction, the Data Centre would employ 20-30 construction workers, and are expected to then employ the equivalent of 21 full-time staff in the longer term – another factor positively contributing to the economy.

The developers are hopeful that once approved, the development will commence in 2016.

Intelligent Land Investments Renewable Energy Ltd secures prime strategic sites for wind farm and run-river developments and takes them through the planning process. Once this is achieved and the site is developed, a guaranteed revenue is created for both the landowner and lease-holder.