A FREELANCE journalist who left Scotland for a three-year adventure in Greece, with her partner and their dog, has written a non-fiction book about living through the Greek economic crisis.

Things Can Only Get Feta, by Marjory McGinn, is now out as a Kindle edition, followed by paperback on the 30th.

Marjory, who wrote mainly for The Herald & Times Group, as well as newspapers in England and Australia, left the village of Dollar, near Stirling, three years ago, with her partner Jim Bruce, a former sub-editor on the Evening Times, and their Jack Russell terrier, Wallace.

Marjory said: “Friends told us that, for a couple in their mid-50s, it was madness going on a long adventure to crisis-torn Greece. But with Britain in recession and Scottish newspapers suffering a painful restructuring in 2009, what was there to fear from Greece on the edge?” 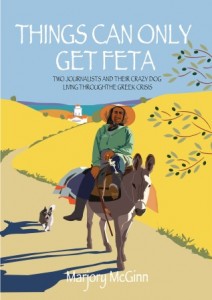 They settled in the southern Peloponnese, near Kalamata, writing articles about Greece for British and Australian publications, and operating a website and blog about their adventures.

Marjory continued: “It’s a light-hearted book that begins with our first year living in the hillside village of Megali Mantineia, where we mixed with goat farmers and olive harvesters and befriended many of them. It also charts our escapades in the wild and remote Mani region, including battles with scorpions, macabre local customs, and encounters with big-hearted Greeks, struggling through the economic crisis.

“I was amazed by the stoicism of these people coping with increasingly harsh austerity measures, proving that Greece still has heroes, if not euros.”

Things Can Only Get Feta is available to pre-order in paperback from amazon.co.uk. For more details, see their website www.bigfatgreekodyssey.com