Made Here: My Brother the Ark Raider, BBC ALBA

DONALD Mackenzie, from Stornoway, was hunting for the remains of Noah’s Ark on Mount Ararat in Turkey when he disappeared three years ago.

My Brother the Ark Raider, a Plainview Films production for BBC ALBA in association with Creative Scotland, follows Donald’s younger brother, Derick, as he leaves his family home in Stornoway and travels across Europe to Dogubayazit, a Kurdish town on the border with Iran at the foot of Mount Ararat.

It is being broadcast this evening, on BBC ALBA, at 2100.

Here, Chris Marks, of Plainview Films (and also news editor at The Scotsman), answers the questions….

Our break with the production came at the Edinburgh Pitch, run by the Scottish Documentary Institute, where Leslie Finlay from Creative Scotland suggested they might be interested if we could get a broadcaster on board.

Margaret Cameron, channel editor at BBC ALBA, was the one who made the leap. I think we came along at the right time, when she had some money to spend on commissioning a narrative documentary from an independent production company. The Stornoway link with the Mackenzie family was a draw for BBC ALBA but it took a leap from Margaret to back a film for a Gaelic language channel that was mostly shot in English and Kurdish and set largely in Turkey. Creative Scotland and MG ALBA put up some funding for research and development, which let us to travel to Stornoway and Turkey for a wee recce, to shoot some footage, establish some contacts and work up the structure.

And on the back of that, we secured full funding from MG ALBA and Creative Scotland to make two versions, a theatrical one for Creative Scotland and a television version – with more Gaelic content and a narration – for BBC ALBA.

Explain the thinking behind the production’s look and feel?

We set out to make an observational doc. We wanted to be on the shoulder of Derick as he made his way from Stornoway to Mount Ararat, which meant he became sort of the presenter, as well as the film’s subject.

We wanted Mount Ararat to be one of the characters in the film. So you’ll see it in almost every shot, sometimes dominating the frame, other times looming in the background or far away on the horizon, but almost always there on screen during the Turkish sections.

We graded the film so the Scottish scenes are a bit colder and greyer, while the Turkish sections have hotter, more saturated colours. 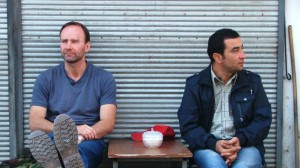 It’s quite a meditative film. Perhaps because we had one eye on the theatrical version, it doesn’t really have the rapid cut and pace often associated with TV docs. Some of the scenes are quite long, quite slow. We wanted the camera to linger, to hang with the silences. The voiceover by the Gaelic broadcaster, Angus Peter Campbell, also lends the film a certain poetic quality. It feels quite European.

We were a tight unit. Plainview Films is just me and Jonathan Carr. We’ve known each other since we trained as journalists in Glasgow in the late 1990’s. We’d made a short documentary, Get Luder, through the Scottish Documentary Institute’s (SDI) Bridging the Gap programme and My Brother the Ark Raider is our first feature doc. Initially, Jonathan directed and I produced but we work very closely together and there was a lot of overlap so we ended up taking a joint producer/director credit.

For the shoot, we added the double Scottish Bafta-winning cinematographer, Julian Schwanitz, who we met through SDI, and Robin Pairman, our utterly dependable soundman and adventurer, who I’ve known for years.

In post-production Angus MacKay did a brilliant job on the edit and Iain Hutchison was our rock on the sound dub.

We were lucky enough to have Scott Twynholm and Biggi Hilmars on board to compose the film’s original soundtrack. Scott and Jonathan used to play in a band together and go back a long way, and Scott and Biggi have worked together on several film soundtracks.

BBC ALBA was keen to get the Gaelic poet and broadcaster, Angus Peter Campbell, to narrate and we recorded his voiceover at Canongate Studios in Leith with Al George.

And finally, Joan MacKenzie, up in Aberdeen, our subtitler and emergency translator, made a difficult job look very easy.

We shot on a Canon EOS C300 and edited on Avid.

What have been the main production challenges?

Aside from shooting across three languages in two countries? Not knowing where the film was heading until we shot it was a challenge but also part of the appeal. We had Derick, we had his lost brother Donald and we had a handful of meetings arranged, but, beyond that, we were shooting on the hoof and seeing where we ended up. We would have liked to have brought more of Donald, the missing brother, into the film, but we only had very limited bits of footage of him. We also hit a huge amount of Turkish ‘red tape’, dictating where and when we could film.

The edit was a real challenge. We left about 40 hours of footage out, some of it really strong scenes that just didn’t fit with the final shape of the film.

Post-production was spread out across the UK, which was a challenge, but thanks to the utter professionalism of all involved we managed to make a unit based in York, Edinburgh, Stornoway, Aberdeen and Glasgow work as if we were all sat in the same office.

Persistence and a little luck gets you a long way. Never underestimate the benefit of local knowledge when you arrive in a strange town in the middle of nowhere. You can achieve great things with a small budget and a talented team. Listen to your editor, especially when you don’t agree with him. And always order the fresh kebab, not the pre-cooked dishes. The thing I enjoyed most? Working with some of my dearest friends to make something I’m proud of, and hopefully bringing a bit of solace to the Mackenzie family.