THE Scots journalist, Melanie Reid, is to receive an honorary degree from the University of Stirling.

Reid – who writes for The Times and was formerly at The Herald – was paralysed following a horse riding accident four years ago.

Says a media announcement issued by the university: “Journalist, Melanie Reid, who lives in Stirlingshire, will receive her honorary degree in recognition of her outstanding contribution to journalism, to disability rights and awareness, and for being an inspirational example of human resilience and dignity. Melanie broke her neck and back in a riding incident in 2010. She has gone on to chart her life and recovery in award-winning columns for the Times newspaper.”

Reid is a former senior assistant editor at The Herald and also a former associate editor at the Sunday Mail.

She is able to push herself about in a wheelchair – and is set to be reporting from the Commonwealth Games and the Ryder Cup, both soon taking place in Scotland – but can type only with one finger.

Her Spinal Column in The Times is award-winning.

Reid is being joined at Stirling by, among others, film director and former Edinburgh Film Festival boss, Mark Cousins. 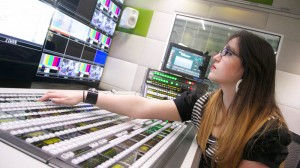 “As part of the Host Broadcaster Training Initiative (HBTI), NEP Visions Ltd – one of the facilities suppliers for Glasgow 2014 host broadcasters SVGTV – brought its Atlantic Outside Broadcast truck onto campus to give students and staff training in the latest HD recording and output equipment.”

TICKETS for a Commonwealth Games-related concert at Edinburgh Castle, being hosted by the BBC, are going on sale tomorrow.

The event – to be shown on BBC One, on the 19th of next month – will be featuring several music acts such as the Kaiser Chiefs, Smokey Robinson, Rizzle Kicks, Paloma Faith and Katherine Jenkins.

The music will also be interspersed with appearances by comedians, Bill Bailey and Fred MacAulay. 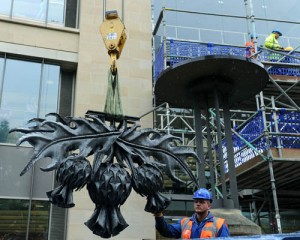 AS mentioned in today’s Media Broth, the sign ‘above the door’ at The Scotsman newspaper, was yesterday taken down, as the newspaper prepares to move to a new HQ, in west Edinburgh.

And here’s the moment when…

AS ever, he ‘pulls no punches’, Kenneth Roy on his ScottishReview.net website, as he writes about BBC Scotland, including this paragraph: “There has been the dropping of Newsnight Scotland and its curiously ill-judged replacement; the revelation of poor staff morale and a pervasive insecurity about what happens after the referendum; bad feeling about the parchuting-in of London ‘names'; and the abrupt dismissal of a respected current affairs presenter of long experience.”

AND commentator, Gerry Hassan, writing also for ScottishReview.net, is similarly provocative in his related article – headlined, ‘A profound absence of leadership, courage and vision’ – here.

SAYS the standfirst to this op ed, by the media pundit, Raymond Snoddy, on MediaTel.co.uk: “Only newspapers have the resources to tackle large-scale, technical and legally dangerous projects – so why do so many people think the future of news lies with the likes of Buzzfeed?”

BOTH The Scotsman (here) and The Herald today carry obituaries of the Scots music critic, Malcolm MacDonald, who died, recently, aged 66.

Today, The Herald’s take on the story begins: “STV has announced it has secured increased bank funding to support its growth strategy.

The broadcaster said it has secured a £60 million facility for five years from Barclays and Santander.”

REPORT festivals? Interested in them? Check out our brand new twitter.com/allFestivalsPR.

« Media Broth: One biscuit or two?
In My Opinion: Billy Briggs: Investigative journalism in Scotland »