“This year will see a number of changes to the judging criteria, including the introduction of three new categories to the production awards: Referendum Programme, Short Form Content and Animation.”

AN awards competition that celebrates the ‘best in news media print, technology and business innovation’ has issued a call for entries.

The deadline for entries is February 6, to the newsawards, previously known as the Newspaper Awards.

BEGINS Gareth Mackie, in The Scotsman, today: “Shares in cloud computing firm [Glasgow-based] Iomart dropped sharply yesterday after it admitted that growth at its web-hosting business had fallen short of its hopes.”

“The Glasgow business also unveiled the acquisition of London-based ServerSpace in a deal worth up to £4.25 million.”

BEGINS Martyn McLaughlin, in The Scotsman (here): “For the first nine months of the year at least, it seemed there was no other story in town, as people from around the UK debated the merits or otherwise of Scotland going it alone.

“Now, newly released research from the world’s leading social network has detailed how September’s independence referendum was the key water cooler topic of 2014.

“Facebook has issued data showing how the most significant date in the country’s political calendar was a talking point across not only in Scotland, but across England, Wales and Northern Ireland.

“The referendum, commonly referred to on social networks by the hashtag, #indyref, was the most discussed topic of the year throughout the UK.”

The story is also featured, here, by The Drum media and marketing magazine.

MEANWHILE, begins The Drum: “It’s been a record-breaking year on Twitter, the company revealed in its annual round-up, with the World Cup becoming the most tweeted-about event ever and Ellen DeGeneres’ Oscar selfie revealed as the most retweeted tweet in the site’s history.”

ALSO begins The Drum: “Brands and agencies have had mixed reactions to Google’s viewability study, which revealed more than half of online ads are not seen by consumers.

“The study, conducted across Google’s display network and Doubleclick ad exchange, used the IAB standards, which specify that for a display ad to be in-view half the pixels must be in the viewable portion of an internet browser for at least one second.”

“Approximately 40 guests from print, radio and television joined the Archbishop and some of his brother priests and headquarters staff at his Morningside residence. 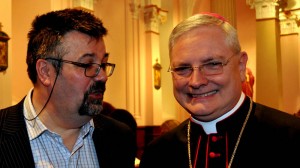 “Among the journalists was Andrew Nicoll, political editor of the Scottish Sun, pictured.

“Archbishop Cushley also took the opportunity to introduce his new director of communications, David Kerr. The former BBC Scotland journalist has been in post since October.”

WELL-known rugby writer, Alasdair Reid, has penned his own tribute to the late rugby and golf writer, Norman Mair – whose death has been noted here and here, on allmediascotland.com.

Reid’s tribute can be found on the back page of today’s Herald Sport supplement – here.

A VIDEO project where strangers were asked to kiss each other has been named among the most-viewed pieces of content on the video-sharing platform, YouTube, this year.

Yet, at over 94 milliion views, the video is – says YouTube, here – not quite the most-trending…

TO open the potentially rich archive in each of the ‘gateway boxes’ you see on the front page of allmediascotland.com, click the link icon you see towards the bottom right of the box.

So, for instance, on clicking the icon in our weekday media news catch-up, Your Noon Briefing, you would see this, here.

It looks particularly lovely on a tablet, now that allmediascotland.com is what is described as ‘fully responsive’, so that the front page fits to whatever screen you are viewing the site on.

« In My Opinion: Lauren Pennycook: the future’s bright – the future’s local
What Was the Year That Was: Paul Hughes, director of channels, STV Glasgow and Edinburgh »