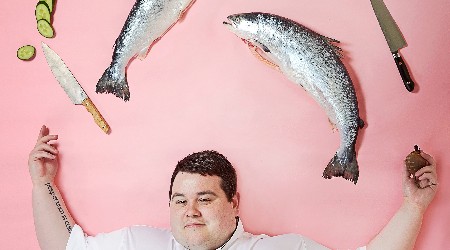 A SCOTS chef is set to launch a new range of cured Scottish salmon at the Royal Highland Show next week, and is already courting interest from USA and Dubai.

Mark Heirs, aged 29, is producing luxury Atlantic-farmed Scottish salmon – dry cured to his own secret recipe – in a mission to promote his passion: the finest cured food.

The new venture, Stirling-based Highland Curing Co, pays homage to the ancient methods of curing with a modern twist of flavours, including gin and cucumber, whisky and beetroot and the classic cure – with five more in development.

As well as demand from Scotland and London, the company has also been speaking to a New York restaurateur and a distributer in Dubai about this new addition to Scotland’s larder.

A quarter finalist of the first series of BBC’s Masterchef The Professionals in 2008, Mark cut his culinary teeth in the kitchens of One Devonshire Gardens, Heston Blumenthal’s Fat Duck before becoming head chef at his family-owned Callendar Arms, Falkirk until 2013.

The lightbulb moment for the business came when he saw the level of interest from customers tasting his cured salmon dishes at cooking demonstrations last year.

Said Mark Heirs, chef director of Highland Curing Co: “I was giving away the recipes before it hit me that what people actually wanted to buy was the cured salmon.

“Seeing the demand made me realise there was an opportunity to open people’s eyes to the wonders of raw food and its incredible taste and texture on a larger scale.

“We have big international aspirations to spread the word about curing so to already have that interest before we’ve officially launched is very satisfying.

“Excellent provenance is key, particularly with cured food. To get those incredible flavours, it has to be the best of the best, which is why we use sustainably sourced salmon from the Outer Hebrides through the Scottish Salmon Company.

Added Mark: “After all, Scotland is an international powerhouse for food and Scottish salmon is its biggest export so we just want to get out there and start making a contribution in Scotland’s Year of Food and Drink.”

Highland Curing Co is creating an online shop – www.highlandcuring.com – and plan to develop new lines, including meat, in the future. In the meantime contact Mark on twitter @highlandcuring

Issued on behalf of Highland Curing Co by JK Consultancy. For further information, please contact Jenny Kumar on jenny@jkconsultancy.com or 07989 557198

Highland Curing Co, purveyor of the finest cured Scottish salmon, was established in February 2015 by chef Mark Heirs out of a passion for producing the finest cured fish and meats. Our cured salmon pays homage to the ancient methods of curing with subtle modern influences.

MEDIA RELEASE issued by JK Consultancy. You too can post your story ideas for journalists (aka press or media releases), on allmediascotland.com. Email here for more information.