Media Release: Grado is in training to judge the Scottish Baker of the Year Awards 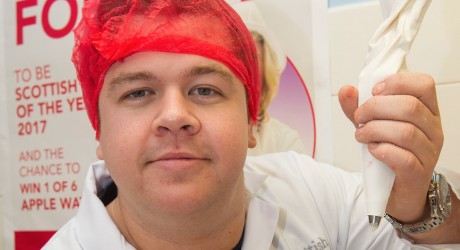 JOIN us for the Scottish Baker of the Year 2017 judging day!

WORLD of Sport champion wrestler, Grado, had such a good time at the launch of the Scottish Baker of the Year Awards that he has come back for more!!

“Since launching the search for the Scottish Maker of the Year Awards with Michelle McManus in February, I have really got into this baking lark so I am coming along to join the professional judges and take a role in helping to choose the best bakery bites in the land,” Grado said.

Public voting for this year’s Scottish Baker of the Year Competition has closed, the votes have been counted and the best bakers have been asked to send in samples of their customers favourites for consideration by a panel of independent experts, and Grado, on 22nd March.

The judges will select the ‘crème do la crème’ from the entries submitted to draw up a shortlist that really does represent the best bakery bites in the land.

The Scottish Baker of the Year Awards is fronted by singing sensation, Michelle McManus, who had a little help from her pal, Grado, to launch the competition as they took on STV’s David Farrell and Jennifer Reoch in a bake-off to beat all bake-off’s!

Although the STV team won on the day, Grado did not take it lying down and he has vowed a show-down next year.

He said: “That’s why I am coming along to judge the awards you know, I have only seen how reigning champ The Kandy Bar do it but in Dunfermline I hope to see some 500 of the lands best cakes, scones, biscuits, pies and loaves. I am, definitely up for this!”

The Scottish Baker of the Year Awards are the brainchild of Scottish Bakers, the trade association for bakers in Scotland who decided to search for the best baker in the land in 2012.

Now in its sixth year, the competition celebrates our love of a tasty treat from our local baker and aims to crown just one hard working bakery Scottish Baker of the Year.

“This competition is based on real votes from real customers and every vote really has counted in drawing up the list of products invited through to the professional judging stage – your local baker could take the title!”

Scottish Bakers was established in 1891 and since then have represented and promoted the interests of the bakery trade in Scotland. They aim to be an integral part of each member’s business by providing support for bakers of all sizes.

They provide a valuable source of help, advice, information, assistance and skills development for bakers throughout Scotland.

Most importantly, Scottish Bakers belongs to its members and exist for their benefit. They are proud of their motto, ‘for the good of all’.

Facts about the competition:

Public voting for this year’s Scottish Baker of the Year Awards 2017 has now closed.

Winners will be announced at the Scottish Bakers national conference on the 5th and 6th May 2017 at the Crowne Plaza, Glasgow.

As part of the competition, we will be awarding the best scone, bread, savoury, individual cake, morning roll and biscuit in the land.

We will also again feature our Manufacturer of the Year Category enabling bakers to vote for their favourite bakery manufacturer.

But the ultimate winner will be crowned the Scottish Baker of the Year 2017/18.