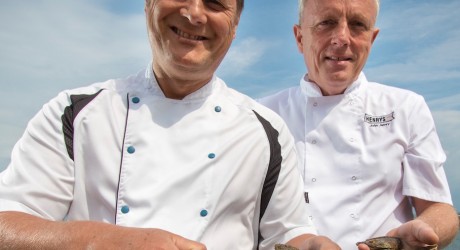 The three-day festival takes place during Scottish Food and Drink Fortnight and will celebrate the seafood heritage of Stranraer, including what is believed to be Scotland’s last remaining wild, native oyster fishery – in Loch Ryan.

The festival marks the start of the oyster harvesting season, which runs from September to April, and it will commence with an oyster landing ceremony, complete with oysters being piped ashore, live music, an ‘Ode to the Oyster’, a giant local seafood paella and fireworks over Loch Ryan.

Saturday sees the festival host the Scottish Oyster Shucking Championship in partnership with Seafood Scotland, and the winner will go on to represent Scotland in the World Championships taking place in Ireland later this month.

Other highlights in the packed programme of festivities are chef demonstrations, including Oyster Pakora being created by Hardeep Singh Kohli, seafood and cocktail combos and a wild food cook-up.

Fifty local businesses will be selling artisan food, drink, arts and crafts in a festival market, and there’s a family-friendly line up of events including extreme pond dipping, kite making and even a guest appearance by Mr Bloom from Cbeebies.

Oyster experts, Loch Ryan Oyster Fishery, will be on hand throughout providing tastings, demonstrations and information about the native oysters, and for those not brave enough to sample the seafood delicacies, there will even be ‘oyster’ ice creams to enjoy!

The native oyster was once widespread around Scotland and much of the UK but has been harvested to near extinction. The Stranraer Oyster Festival provides the first opportunity for members of the public to try these unique oysters on the banks of the sea loch from which they are carefully harvested.

Romano Petrucci, chair of Stranraer Development Trust, the organisation behind the festival, said: “We wanted to create a festival that would showcase the stunning beauty of Loch Ryan, the unique seafood that resides within the Loch and the warmth of the people of Stranraer.

“Like many oyster festivals around the world we have taken the oyster as a focal point and created a celebration of local food, local culture and the local community around it.  We can’t wait to welcome visitors to our beautiful town, the excitement is building and we are looking forward to a weekend that’s filled with fun and flavour.”

The festival is part-funded by the European Maritime Fisheries Fund and by Dumfries & Galloway Council’s Major Events Strategic Fund.

The festival is also supported by The Holywood Trust and the Big Lottery Fund.  It is working in partnership with Seafood Scotland and is sponsored by a large number of local businesses.

Full programme information and ticketing details are on www.stranraeroysterfestival.com.

A selection of photos can be downloaded from:  https://www.dropbox.com/sh/cex1xc2nldqynxw/AAA0kZ5zagM_hKXRjV797K0Ia?dl=0

·         Legend has it that Julius Caesar once wrote that Loch Ryan oysters are the best in the world!

·         The festival is being organised by Stranraer Development Trust.

·         Stranraer Oyster Festival celebrates Stranraer’s unique seafood heritage as being home to what is believed to be the only native oyster fishery in Scotland.

MEDIA RELEASE issued by Lorna Young. You too can share your stories (aka press or media releases), on this site. Email here for more information.