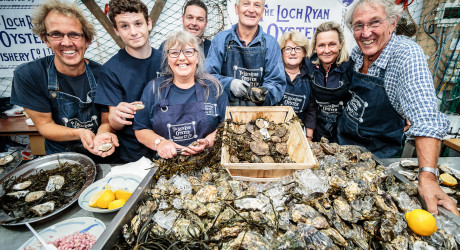 STRANRAER Oyster Festival has been hailed a ‘phenomenal success’ by organisers, as it returned for its third year.

The community-run festival is organised by Stranraer Development Trust. It takes place next to Loch Ryan, which contains what is acknowledged to be Scotland’s last remaining wild, native oyster fishery, and the festival celebrates the town’s native oyster heritage alongside a programme of entertainment and activities.

Chair of Stranraer Development Trust, Romano Petrucci, said: “Without a shadow of a doubt this year’s festival was bigger and better in every way. It was a phenomenal success and we are overwhelmed by the positive comments from visitors, traders and local folk alike.

“Our wee oyster festival has truly come of age. It is amazing to think that, in just four years, we have taken Stranraer Oyster Festival from a quirky idea to now establishing it as one of the south of Scotland’s biggest events. And by doing so, establishing Stranraer as a vibrant destination for people to visit.

“We are now starting the planning for our 2020 festival in earnest to help celebrate Scotland’s Year of Coast and Water 2020, and we are looking forward to once again putting Stranraer on the tourism map and showing just what our toon is capable of.”

Tristan Hugh-Jones, of Loch Ryan Oysters, shucked his way back to the top spot at this year’s Scottish Oyster Shucking Championships.

Tristan, who won the title in its first year in 2017, will now represent Scotland at the World Oyster Opening Championships in Galway later this month.

Organised by Seafood Scotland and hosted by world Guinness record holder, Patrick McMurray, 16 of Scotland’s finest shuckers competed against each other and the clock to win the title.

New for the 2019 festival was the Scottish Oyster Eating Championship with Loch Ryan Oyster Fishery once again scooping the championship title. Fin Bullough was the top oyster eater, getting through six oysters and a pint of Guinness in an incredible 12.46 seconds!

Mairi Gougeon, the Scottish Government’s Minister for Rural Affairs and the Natural Environment, visited Stranraer Oyster Festival with her family and took a trip out on the Vital Spark to see first-hand the sustainable approach to native oyster management in Loch Ryan.

Local politicians got a special lesson in oyster shucking from expert Patrick McMurray.

Emma Harper MSP and Councillor Adam Wilson joined Mairi Gougeon in learning how to deftly open a native oyster. Constituency MSP for Stranraer, Finlay Carson, visited the festival with his 93 year-old father, who proved it’s never too late to try an oyster for the first time!

Local food and drink was showcased throughout Stranraer Oyster Festival with record sales reported by traders. The festival also produced some innovative collaborations – should Scotch Pie-aella be on the menu next year? Scotch Pie World Champion Kerr Little and Giant Paella expert John Henry had a test run this year!

Creatures of the deep

It’s not just oysters that can be found in Loch Ryan!  The Extreme Pond Dipping event showcased some of Loch Ryan’s other fascinating creatures, including a dogfish, a Scottish lobster, starfish and a selection of crabs.

Celebrity chef, Tony Singh, delighted the crowds at Stranraer Oyster Festival with his passion for great food, his humour and his stories. Tony’s events were complete sell-outs and he spent time enjoying the festival atmosphere with friends, Massimo and Douglas Lisi.

A large selection of FREE TO USE PHOTOS of Stranraer Oyster Festival 2019 can be downloaded from: https://www.dropbox.com/sh/cex1xc2nldqynxw/AAA0kZ5zagM_hKXRjV797K0Ia?dl=0

Alternatively, images can be sent via email or WeTransfer on request.