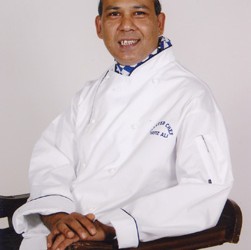 CELEBRITY TV chef, Mafiz Ali, is preparing a sumptuous feast at his Ayr Spice Indian Restaurant in Minishant South Ayrshire for customers old and new to celebrate the Royal wedding of Prince William and Kate Middleton next week.

He says it will be a banquet fit for a future King and Queen.

Choice of drink and papadoms with chutneys on arrival

Tiger by the River

Succulent whole king prawns cooked in a pan with a variety of spices in a medium, thick sauce with aromatic flavours and a splash of red wine.

Chicken or lamb tikka delicately marinated with authentic spices and barbecued and glazed in a clay oven with master-seeds, herbs and spices to produce a mouth-watering sauce.

Succulent salmon fillet pan-fried with fresh onions, peppers and tomatoes in a rich sauce topped with an ultimately rich blend of house yoghurt and coriander.

There will also be a barbecue on Friday, Saturday and Sunday 29 and 30 April and 1 May from 12noon until 10.30pm price £9.95. Food served outside weather permitting!

PLEASE NOTE THAT THIS ROYAL WEDDING DAY MENU IS ONLY AVAILABLE BY PRIOR BOOKING. TELEPHONE 01292 441413.

Mafiz Ali has enjoyed a busy and successful start to 2011.

He has made two guest appearances on STV’s popular early evening television programme, ‘The Hour’, with regular hosts Stephen Jardine and Michelle McManus.

He has also already this year put on successful special menus to celebrate Mother’s Day and the Bangladeshi New Year.

And finally, Mafiz has extended the opening hours of Ayr Spice Indian Restaurant, which is now open from 12 noon until 10.30pm every day.

And he will shortly introduce a Tandoori Barbeque, at which customers can dine al fresco (weather permitting!) in a family-friendly atmosphere with a treehouse for the kids and ample parking.

There will be further exciting developments to be announced during the course of the rest of the year which will cement Ayr Spice’s place as one of the top fine dining experiences in South West Scotland.

Mafiz climbed the ladder to fame when he won a chef of the year award in 1998 and, almost immediately, added one for exceptional hygiene and cleanliness. Newly crowned at Westminster, he was commissioned by the then Prime Minister, John Major to supply a banquet for his 50th birthday at Number 10 Downing Street.

It is not widely known that 92 per cent of all ‘Indian’ restaurants in the UK are in fact Bangladeshi, and it was to promote such eating houses and reward young chefs by recognising their talents, that Mafiz founded the ‘British Bangladeshi National Curry Awards’ at the Houses of Parliament at Westminster, also in 1998.

Mafiz Ali has been closely associated with charities, notably when he entered the Guinness Book of Records with 4.5 tons of chicken korma, which was then eaten at a charity event. Because of the enormous quantities involved he had to seek the advice of a professional engineer for the technical realisation of the project. His other charitable activities have included the Essex Air Ambulance Service and several children’s charities.

MEDIA RELEASE posted by Fame Publicity Services. You too can post media releases (aka press release) on allmediascotland.com. For more information, email here.