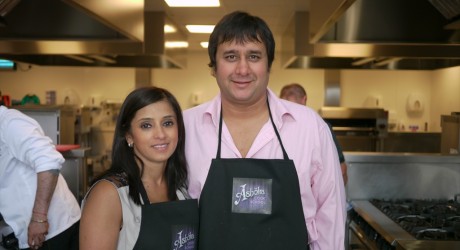 THEY say that behind every great man is a great woman, but as ‘curry queen’, Jiggy Majhu, shows, sister’s are now doing it for themselves, for Jiggy has finally stolen the limelight from hubby, ‘curry king’, Sanjay Majhu, with the launch of the Ashoka Cook School.

Ashoka, part of the Apple Harlequin Group, has teamed up with Motherwell College to offer classes on how to prepare the perfect Indian meal.

Ashoka Cook School founder, Jiggy Majhu, said: “I’ve been working hand-in-hand, alongside Sanjay, to build Harlequin into the largest and most popular Indian restaurant group in Europe for many years now, so it’s great to finally emerge from his shadow with this exciting new venture. Everyone knows Scots love curries and I’m sure our new Cook School will prove to be a popular success.

“If you love Indian cuisine and fancy trying your hand at cooking up your own delicious Indian banquet, then Ashoka Cook School will provide you with the perfect recipe for successfully cooking up a storm in the comfort of your own home.

“You’ll find out just how easy it is to prepare our delicious Ashoka cuisine at home as our masterchef and his assistant take you through a step-by-step guide to preparing and cooking your meal.

“Over the weeks, you’ll learn how to make a sizzling selection of Indian starters, main courses and accompaniments – and at the end of the class you’ll be given the recipes to try out for yourself at your leisure at home.”

Lessons will be led by executive chef, Dali, an Ashoka veteran of some 25 years, whilst Jiggy has secured the expertise of James Tagg (former executive chef at Rangers FC and now executive chef at Manchester United FC) who will act as a non-executive director to Ashoka Cook School.

An Ashoka Silver Class, including an extra course, is priced at £50 per person for a two-and-a-half hour class (or £200 for five sessions) available at various times throughout the day. Day classes, available at £130 per session or £100 per day for a minimum of two days, run from 10.30am till 3.30pm.

Meanwhile, a Celebration Class, ideal for hen parties, stags and corporate team building exercises, are available at £100 per person, for a minimum of ten people, from 10.30am till 3.30pm.

All classes offer a selection of five different menus and run Wednesday, Saturdays and Sundays at Motherwell College.

Meanwhile, an Ashoka Gold Class, available at £250 per session, will run from 10.30am till 3.30pm on a strictly limited number of weekends and feature a five course banquet created by Ashoka owner Sanjay Majhu and executive chef, Dali, of Ashoka Ashton Lane. It will also incorporate an insightful business presentation on ‘how to run a successful restaurant business’.

To book a place at Ashoka Cook School call 0141 342 5200 or go online at www.ashokacookschool.com