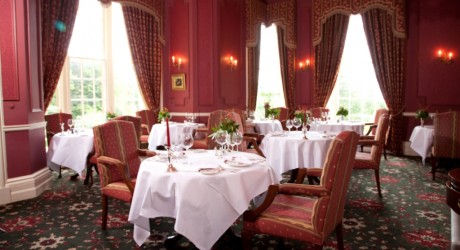 THE restaurant at Glenapp Castle Hotel, the luxury five-star Relais & Châteaux Castle Hotel in Ayrshire, has been awarded four AA Rosettes, making it one of only a handful of elite restaurants in the country to secure the coveted accolade.

The honour is the latest in a string of awards to be showered on the hotel over recent years following the appointment of head chef, Adam Stokes, in 2008.

Commenting on the award, Stokes said: “I am absolutely delighted to be awarded four AA Rosettes. Over the last four years at Glenapp Castle, the food has progressed and developed into a modern, stylish culinary journey embracing traditional food marriages with inventive twists.”

A Scottish Baronial castle, secluded amongst 36 acres of garden and woodland on the rugged and beautiful Ayrshire coast in Ballantrae, Glenapp Castle Restaurant’s team is led by manager of ten years, John Orr and his assistant and head chef’s wife, Natasha Stokes.

Fay Cowan, who runs Glenapp Castle, alongside her husband Graham, said: “We’re delighted that Adam and his team have received this tremendous recognition for the excellence of their food and service in our fine dining restaurant. Achieving four AA Rosettes is no small feat and is the culmination of a series of detailed inspections over a number of years.”

“Since his first season at Glenapp Castle, head chef, Adam Stokes, has achieved and maintained substantial accolades for the food served and the service continues to delight guests and reviewers alike.”

A restaurant’s food quality is assessed by the AA inspectorate, who award AA Rosettes to establishments demonstrating mastery and excellence in this field.

AA hotel services manager, Simon Numphud, said: “We are very impressed with the quality of this year’s winners, who have demonstrated intense ambition and a passion for excellence, as well as superb technical skills and innovative menus. It is encouraging and refreshing to see that there are a number of establishments that continue to raise the standards and encourage excellence in the industry.”

Each evening the restaurant at Glenapp serves a six course gourmet menu, expertly prepared by head chef, Adam Stokes, and his team. While all resident guests have an automatic dinner reservation, the dining rooms at Glenapp are also open to non-resident guests by prior reservation for lunch and dinner.

The AA four Rosettes are the latest in a string of awards to be showered on the hotel over recent years. This summer, Glenapp Castle Hotel won Restaurant of the Year in the catering industry’s prestigious 2011 CIS Excellence Awards.

Amongst other accolades won by the restaurant at Glenapp Castle Hotel are an EatScotland 2011 Gold Award, while Adam Stokes won the Gourmet Menu of the Year category at the 13th Annual Scottish Chef Awards.

Meanwhile, Graham and Fay Cowan were recently presented with a Gold Laurel – Outstanding Achievement Award for the restoration of the beauty of Glenapp Castle and Gardens at the Scottish Hotel Awards and Glenapp was named Romantic Hotel of the Year 2011.