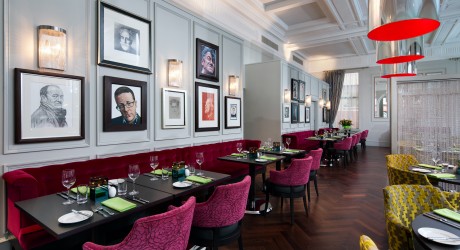 HOTEL Indigo will be the sole Scottish representative at next week’s finals of the prestigious European Hotel Design Awards, which take place at the Park Plaza in London on 22 November.

The four-star plus hotel in the city centre is the only Scottish venue to make the shortlist at these prestigious architectural awards, at which Hotel Indigo is a finalist in the ‘Conversion of a Non Hotel Building for Hotel Use’ category.

East Kilbride-based Ica Architects are the architectural team responsible for the stunning transformation of the Waterloo St building from which, in the 19th century, the Glasgow’s first Power Station was run.

To date, the hotel has enjoyed above average occupancy levels and has welcomed in excess of 25,000 guests from as far away as Japan and as close to home as Pollokshields.

Celebrities including chart sensation Paolo Nutini, EastEnders star Sid Owen, former WBO title holder Joe Calzaghe and Big Brother host Brian Dowling have all visited. As a result of their high standards of service, the hard work of the hotel’s 100 full and part-time staff has been rewarded by Hotel Indigo being No1 hotel in Glasgow consistently for the past three months on the highly influential TripAdvisor website.

General manager, Denis MacCann, notes: “Being the first hotel of its kind to open outside of London, we believe that we are playing our part in establishing the high quality for which the Indigo brand stands. It would be the icing on the cake to win the European Design award, however just to be nominated is praise indeed.”

A win would add to the venue’s burgeoning trophy cabinet which already houses the coveted the 2011 Dram Scottish Licensed Trade Award for Best New Bar, which was awarded to Limelight, which operates as the residents’ Bar and Restaurant.

MEDIA RELEASE posted by Emjay PR. You too can post a media release (aka press release) on allmediascotland.com. For more information, email here.