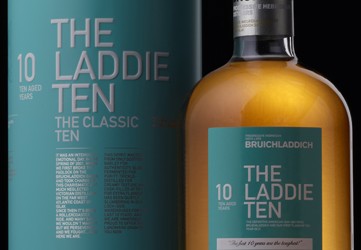 THE Laddie Ten, Bruichladdich’s flagship ten year-old whisky, has been selected to feature as one of the whiskies in the 2012 edition of Ian Buxton’s book, ‘101 World Whiskies to Try before You Die’.

Says a spokesperson: “A veteran of the Scottish whisky industry, having previously held the position of marketing director at Glenmorangie, Buxton now works independently, following his passion for Scotch malt whisky wherever it may take him.

“He has written several previous publications about malts and the distilleries that make them.

“Buxton received widespread critical acclaim for the first edition of ‘101 World Whiskies to Try before You Die’ (2010), particularly for his down-to-earth and fresh approach, because it was aimed at regular whisky drinkers and not specifically the collector.

“Now in its second edition, his lifelong love affair with malt is apparent; and while the focus is more on the everyday there is enough esoterica to keep the diehard fanatic happy. This time however, the world, rather than just Scotland, is his canvas.”

Bruichladdich’s founder and managing director, Mark Reynier, commented: “We are very pleased that The Laddie Ten has been included already, it having been released only nine months ago.

“Buxton’s book is a practical guide to the world of whisky, featuring everyday, affordable and readily available whiskies.

“The Laddie Ten Year Old is is without doubt the most important release in Bruichladdich’s history and very much a landmark for the distillery.”

The 2012 edition of ‘101 World Whiskies to Try before You Die’ will be published on 5th July and is available to reserve via Amazon.

About the Laddie Ten

The Laddie Ten Year Old is the first whisky to have been distilled and matured for full ten years under the new ownership. The whisky is malted from only Scottish barley, slow-fermented for purity, trickle-distilled for creamy texture and cask-filled at 70 per cent for extra flavour. Matured locally at the distillery in Islay, the Laddie Ten was released on September 9th 2011 and is available worldwide.

Bruichladdich is an innovative artisan distillery producing Islay single malt whisky. Privately-owned, it distils 700,000 litres annually from mainly un-peated barley from 28 Scottish farms, half organically grown, half from Islay itself.

Bruichladdich is bottled on site at 46 per cent with Islay spring water, free from colouring and non chill-filtered. Botanist Gin, peaty Port Charlotte and Octomore, the world’s most heavily peated whisky, are also distilled here.

MEDIA RELEASE posted by Bruichladdich. You too can post media releases (aka press releases) on allmediascotland.com. For more information, email here.