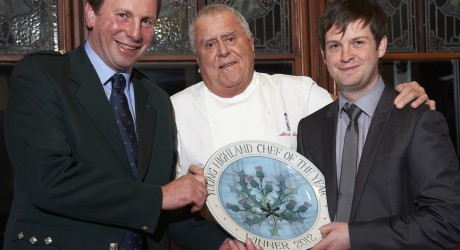 A CHEF from Fort William has been named Young Highland Chef of the Year.

Twenty-seven year-old Ross Sutherland beat off competition from four other finalists to win the title at yesterday’s cook-off, held at the Burghfield House Hotel in Dornoch.

The presentation was made by internationally renowned chef, Albert Roux OBE KFO, who led a judging panel of seven expert chefs, including Andrew Fairlie and Brian Maule.

Ross was awarded with a week’s work experience at Mr Roux’s La Gavroche restaurant in London, £500 and a trophy.

The Young Highland Chef competition, now in its fourth year, is organised by North Highland College UHI’s Burghfield training hotel and the Albert Roux Consultancy in association with Caterer and Hotelkeeper magazine and North Highland Products.

Entrants aged between 18 and 30 were invited to submit a menu for two on paper which contained salmon in the starter, game in the main course and apple in the sweet. The six applicants judged have the best menu went on to cook their dishes at yesterday’s final.

Ross, who is a head chef at the Cross Restaurant in Kingussie, was judged to have produced the winning meal of salmon tortellini with pea and watercress velouté and lemon oil; roasted squab pigeon with mini pithivier, fondant potato and beetroot and blackberry jus; and apple tarte tatin with salt caramel and barley ice-cream.

Thomas Marshall, a sous chef at the Boath House Hotel in Aldearn, came second, winning £250 and a week’s work experience at The RAC Club in London.

Mr Roux said: “This is an important day for the young contestants. They may be in a remote location, but they have a very important part to play in the future of the country, culinary wise. Ross Sutherland demonstrated many skills in producing his winning dishes and was certainly a worthy winner of Young Highland Chef this year.”

Commenting on his win, Ross said: “I’m over the moon. I entered the competition two years ago and it’s so good to have come back and won it. It’s great to have the association with Albert Roux and I can’t wait to do my stage at Le Gavroche.”

Russell Rekhy, Burghfield campus manager, added: “We were delighted to be involved in this year’s competition. It gives us the opportunity to showcase some of the marvellous talent in our region as well as our training hotel, which serves one of the region’s key industries.”

Other finalists in the competition were Ross Payne from the Melvich Hotel and Matthew Parker from the Burelton Park Inn. The chefs who joined Albert Roux on the judging panel were: Andrew Fairlie, Brian Maule, Derek Johnstone, Glen Watson, Philip Corrick and Steven Doherty.

University of the Highlands and Islands · Food · Scotland-wide