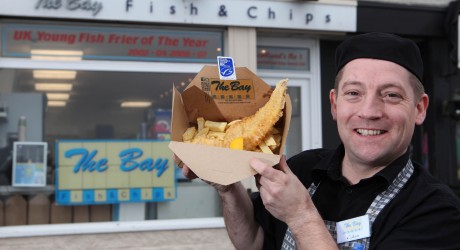 A NORTH-east multi award-winning chippy has been recognised once again for its commitment to sustainability by being named a finalist in two categories of the prestigious VIBES Awards.

The Bay Fish and Chips of Stonehaven, Aberdeenshire, has been announced as a finalist for the Management award and the Waste and Resources award in the VIBES, which aims to recognise businesses that take significant measures to improve or reduce their impact on the environment.

The chippy which has already achieved many accolades over the last year for its commitment to sustainability, including being crowned Scotland’s No.1 fish & chip shop for the second year running, is leading the way for the fish and chip industry and goes the extra mile to operate in a more environmentally friendly manner.

The business which trawls out all the stops to operate more green is run by husband and wife team, Calum and Lindsay Richardson, who both share a drive and focus for sustainability, local produce, the environment and their local community.

Owner of The Bay, Calum Richardson said: “We were over the moon to hear we had made it to the finals of two categories at this year’s awards.

“We have made a lot of changes to the way in which we operate in the shop, and that has helped us reduce our carbon footprint.

“We have proven that even the smallest of businesses can make a huge difference to the environment; we recycle our food waste, cardboard, glass and paper into British Standard Industry accredited compost, which has reduced our landfill rates by 75 per cent.

“Being named a finalist is a great accreditation for the business and a great boost for the staff and for all their hard work.”

The Bay has a three star rating from the Sustainable Restaurant Association (SRA) placing it as one of the highest rated restaurants in the UK and was the first fish and chip shop to achieve an MSC Chain of Custody for North Sea haddock, ensuring full traceability of all the haddock suppers sold in the shop.

The shop uses environmentally friendly cleaning products that are 100 per cent chemical-free and all packaging is fully compostable. The shop uses 100 per cent renewable electricity and all waste oil is collected and recycled into bio diesel.

The winners of the awards will be announced at a ceremony on Thursday 29 November at the Marriott in Glasgow.