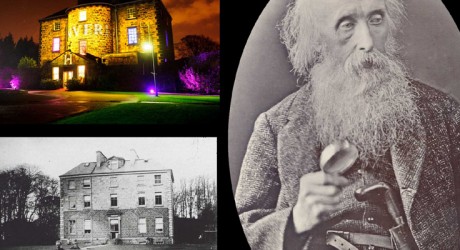 A HISTORIC mansion house which served as home to a distinguished line of Victorian botanists and gardeners is to be turned into one of the most sought-after and exclusive entertaining venues in the country.

The architectural gem at the heart of the Royal Botanic Garden Edinburgh (RBGE) is to be opened as a fine-dining venue which will take bookings for one month only, a move expected to spark a scramble for places, particularly among businesses keen to impress corporate clients.

Inverleith House is renowned as the world’s only art gallery based in a botanic garden and its 2012 exhibition by Luke Fowler was nominated for the Turner Prize. It was also named by art world grandee, Penelope Curtis, director of the Tate Britain, as her favourite gallery.

Originally, the three-storey mansion house was designed for the Rocheid family in 1774, but later became home for successive Regius Keepers of the Botanic Garden, the traditional title held by the scientists and specialists who have been its director.

Noted for the natural light which floods in from the many windows, offering panoramic views of the Garden and the Edinburgh skyline, the building became founding home of the Scottish National Gallery of Modern Art, from 1960. In 1986, it reverted to use by the Garden, dedicated to running a programme of modern art exhibitions.

Now, Sodexo Prestige Scotland has been granted permission to transform the building into an exclusive fine dining venue for just 30 days in December, when guests will be served locally sourced and sustainable produce, including plants from the Garden, prepared by top chefs.

Paul Mitchell, Sodexo Prestige catering services director at RBGE, said: “We have longed for the chance to use this outstanding space for fine dining and show what is possible here.

“Given the cultural and historical importance of the building and the gallery, we are thrilled it has now entrusted us with this opportunity.

“We work at some of the most unusual and interesting venues in Scotland, including castles, museums, stately homes, and other amazing heritage buildings.  Inverleith House will go straight to the top of the list of must-try destinations.

“The fact it will only be available for 30 days is guaranteed to increase its appeal. Coupled with the quality of fine-dining our chefs offer, we expect to be booked out extremely quickly.

“It really is an incredibly rare opportunity, particularly since it will be available for Hogmanay. A venue like this could be the ultimate place to celebrate Christmas or New Year in quite notable style.

“What we proved with our preview event is that Inverleith House works as a fine dining venue, every bit as special as we hoped it would be. The entire team, led by general manager Fraser Sharp, can be proud of what they achieved with setting up and looking after the venue, while our chef Ben Harrison and the kitchen team surpassed themselves.”

Heather Jackson, director of Enterprise at RBGE, added: “As a dining experience, it was everything you’d expect and more. It really is an atmospheric building in an amazing location and the chefs delivered an outstanding menu.”

Sodexo Prestige partners with 17 venues across Scotland, including Hampden Stadium, National Museums of Scotland, Perth and Hamilton Park Racecourses, Blair Castle and Aberdeen Football Club. It also provides catering for The Open Championship, one of the world’s biggest golfing events.

But the jewel in its crown in Scotland is its partnership with RBGE. Since the Queen opened a new £15.7 million visitor centre at The John Hope Gateway, Paul Mitchell’s 40-strong Sodexo Prestige team has run its signature restaurant, steering it to a prestigious listing in The Good Food Guide.

They also run RBGE’s Terrace Cafe, East Gate Lodge Coffee Bar and run events and conferences across the site, including at its Caledonian Hall, all of which has helped the Garden earn coveted five star status from VisitScotland and brought valuable income which helps safeguard one of the country’s finest, publicly-owned treasures.

Despite those successes, Inverleith House has remained off limits and has been retained solely for use as an art gallery. Delivering a programme of four exhibitions per year, by leading national and international artists in partnership with public and private galleries such as Tate, National Galleries, Gagosian and Hauser and Wirth, it is the only contemporary art gallery in the world within a botanic garden and uses the location to explore the relationship between science and art.

As well as catering for daily visitors at RBGE, the Sodexo Prestige team handle around 90 wedding parties each year, as well as dozens of conferences, corporate events and other functions.