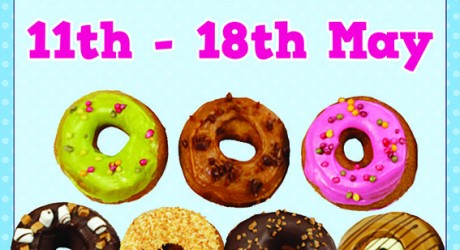 THERE’S doughnut deals galore in-store all this week at Bradfords Bakers as one of Glasgow’s best-known and oldest family firms gets set for National Doughnut Week!

Running from Saturday 11th till Saturday 18th May, every doughnut sold by participating bakers in National Doughnut Week raises money for The Children’s Trust, a national charity that provides specialist care and rehabilitation for children with multiple disabilities.

Claire Bradford said: “National Doughnut Week is a great way to give yourself a treat whilst donating to a great cause. What better excuse to indulge yourself with a delicious, freshly baked doughnut!”

Bradford’s National Doughnut Week special deals include: four sugar doughnuts for £2; two speciality doughnuts for £1.20 and a doughnut of the day, which will include caramel and custard, bramley apple and fresh cream, toffee meringue, fresh cream strawberry, Rocky Road, apple and cinnamon and Tutti Frutti.

There will even be a delicious deconstructed fresh cream strawberry doughnut!

Founded in the south side of Glasgow in 1924, Bradfords Bakers remains a family owned and operated business with support from skilled staff still baking traditional hand crafted products.

For further information about its National Doughnut Week special deals log onto www.bradfordsbakers.com or http://www.facebook.com/bradfordsbakers

National Doughnut Week has raised over £755,000 for children’s charities in the last 21 years.