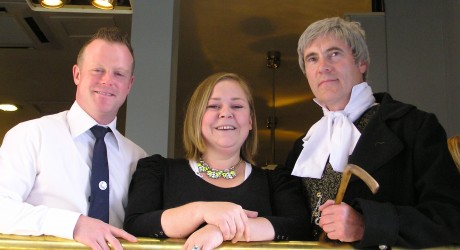 SIR Walter Scott wouldn’t have written anything that took 40 years in the making.

So, what was the man endowed with Scotland’s biggest monument doing at Brown’s Bar and Brasserie in Edinburgh?

Celebrating the launch of ‘Browns, Forty Years in the Making’, that’s what.

Arguably Scotland’s greatest-ever literary figure was tempted out of two centuries of retirement to give his eulogy to the volume that he then asked, “Is this set to be a new Waverley novel? Well, at 40 years in the making, it’s long enough.”.

“Ah, yes,” said everyone else. “Just what Edinburgh needs, another Festival book launch.”

Sarah Fox, who previously managed Edinburgh’s Browns, says in the foreword that the secret is to take care of people. “The heart of what we do is still the same as in the early days.”

Tony Craig, current Edinburgh general manager, says it’s the first time there’s been a book on Browns menu. “I think it’s no secret that we’ll still be known for fine dining and cool cocktails, but there’s around a dozen in the book to hone your own mixology skills.”

The book, easily among the best literary works to be launched on George Street this week, features recipes, cocktails and context from 1973 to the present day.

If you want 40 years of food fun and four decades of refreshment reminiscing, this is the restaurant-themed tie-in publication for you.

If, on the other hand, pictures of what you were wearing in 1973, 1983, and 2003 might be cause for embarrassment, maybe you should just get a copy for your friends – and watch them cringe at the platform wedges and suits fit for the cover of ‘Lexicon of Love’.

As the Brighton Browns founders, Jeremy Mogford and John Mayhew, may say: “We’ve come a long long way together, through the hard times and the good”, but then, they’d only be quoting their fat but slim musical neighbour.

As Walter Scott most definitely did say: “To all, to each, a fair good night, and pleasing dreams, and slumbers light.”

Available from all good Browns and from the Edinburgh International Book Festival Shop (and that’s just across the road from Browns on George Street).

Image is of Tony Craig and Sarah Fox (Browns Edinburgh general managers present and past) with Sir Walter Scott (who may be actor, John Nichol).

A TRAINEE reporter is being sought at The Campbeltown Courier newspaper. The vacancy can be...

A SOCIAL media manager is being sought at The Scottish Sun. The vacancy can be...