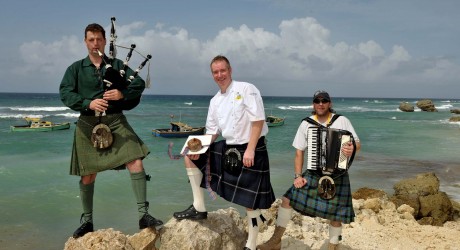 AWARD-winning Scottish chef, Paul Wedgwood, and his partner, Lisa – owners and operators of Wedgwood the Restaurant in Edinburgh’s Royal Mile – have become shareholders in a restaurant business in Barbados.

Their involvement will allow the current model to capitalise on the multiple opportunities locally and regionally, and help to expand local business, ‘Relish Epicurea’, based in Limegrove, Holetown.

Relish was set up just over two years years ago by local entrepreneur, Alison Kern, and is a popular venue for breakfast, lunch, early diners, gourmet shoppers and visiting celebrity chefs to provision for their menus.

It is the only local brand in the infamous Limegrove Promenade a new lifestyle shopping centre on the west coast of the island.

Relish adds a touch of local and international culinary flair to the key brands Louis Vuitton, Cartier, Ralph Lauren and Michael Kors. It is a quality delicatessen restaurant importing favourite wines and foods, and features hard to find Caribbean foodie items too!

With the investment from the Wedgwoods, Relish will open a further two Fresh Café outlets, in February 2014: the Relish Fresh Café at Warrens and the Relish Dockside café at Port Ferdinand, a luxury property development of yachting marina and waterside apartments in the North-west coast of the island.

Chef, Paul, has been head chef of the Celtic Festival Barbados for the last three years. This has involved him creating recipes and running food events at the festival which fuse together flavours from the Caribbean with Scotland, and inevitably travelling regularly to this popular island.

He was married to Lisa on the island this May ahead of this year’s Celtic festival.

Paul plans to bring his creative flair and expertise to the menus offered in all the restaurants.

Already, he has introduced a hot and spicy soup based on Vietnamese ‘Pho’, which has become hugely popular, along with a ‘fish skin broth’ – which has never been done before.

He was the first chef to make haggis on the island, using local ingredients of black belly sheep and spices.

He says: “I am very excited by this new development in my career. Our restaurant in Edinburgh has become so popular and we have won the Scottish Licensed Trade News Restaurant of the Year for the fourth year in 2013 – my skills will complement Alison’s at Relish and we can inspire each other, and offer a synergy of our experiences of food and the hospitality business.”

Alison Kern, proprietor of Relish Epicurean in Barbados, says: “Since the first day I met Paul, when he sought me out in my new restaurant not long after it had opened, I sensed a synergy between us both. He has already brought many new ideas to the restaurant at events he ran with me during the Celtic Festival every May time.

“He has already delighted my customers with new exotic recipes such as his Hot Soup, based on a Vietnamese recipe for Pho – Bajans have never tasted the like, and its flying out the door at lunchtimes.

“He also created an extravagant version of our Saturday street food, ‘Pudding & Souse’, the famous pork with sweet potato pudding, which he created first in his fine dining establishment in Edinburgh to delight the palates of some Scots at a Bajan night! What we have amusingly called ‘Posh pudding and souse…’.

“People on this island relish new ideas in cuisine and something which can combine our marvellous local supply of fish and fresh vegetables along with spices which give us our name.”

Paul Wedgwood started his career in the Lake District. A passionate and ambitious chef, his long term goal was to open a fine dining restaurant where he could combine his experiences and offer fine dining in informal surroundings with excellent service.

His dream came true in August 2007, when he and his fiancée Lisa found the venue for Wedgwood the Restaurant on Edinburgh’s famous Royal Mile.

Wedgwood the Restaurant has quickly become a key player in the Edinburgh restaurant scene delighting customers from far and wide and scooping up awards for great food and service. From a Silver medal at the Scottish Chef Awards, to a place in The Michelin Guide, to Best new restaurant in the UK in Hardens Restaurant Guide, and in 2010 and 2011 a Fodor’s Choice Distinction Award. Only three other restaurants in Edinburgh have achieved this status! For the last four years, the Scottish Licensed Trade News presented Wedgwood the Restaurant as their Restaurant of the Year in the £35 category.

Paul with his vivacious and enthusiastic character is often called upon to perform cooking demonstrations throughout the UK – at Taste of Edinburgh Festival and The Royal Highland Show as well as flying the Scottish flag at the Celtic festival in Barbados food events, where he is a regular guest on CBC TV’s ‘Mornin Barbados’.

Paul Wedgwood’s style of cooking is arguably unique – it is essentially Scottish with influences from his worldwide travels. Paul focuses on Scottish ingredients sourced as ethically as possible – which are as local as possible but he is not prepared to compromise on quality. You will regularly find hand dived scallops from the island of Skye on the menu, along with venison, duck and Scottish lobster.