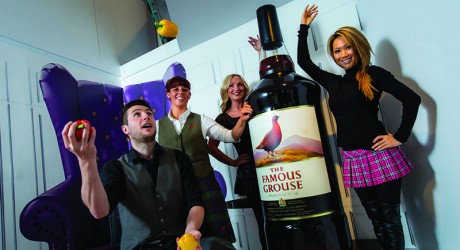 THE Famous Feastival was tuning up to play their part in a country wide celebration of Scotland’s national drink.

Gathering at The Famous Grouse Experience in Crieff, Scottish band, Whisky Kiss, and The Roving Drammolier, Lucy Whitehall, were relishing the opportunities presented by combining food, whisky, chocolate and music.

The event, which will be hosted at The Famous Grouse Experience in Crieff, will also see Michelin-starred chef, Tom Kitchin, play a key role in what is expected to become one of Scotland’s best small festivals.

On Sunday 25th May, the whisky flavoured feastivities will be kicking off with a whole array of public events including a Q&A with book signing opportunity with Tom Kitchin, free chocolate and whisky tasting sessions with master blender Gordon Motion and Wicked Chocolate, and live music from Whisky Kiss throughout the day.

There is also an exclusive range of whisky blending and chocolate making masterclasses available, as well as a limited number of VIP taste experiences, bookable in advance, including a private lunch hosted by Masterchef judge and BBC Saturday Kitchen favourite, Tom Kitchin.

The Scottish chef has developed an exclusive menu specifically for the event, marrying whisky and seasonal produce to tempt the taste buds of Feastival go-ers.

Gordon Motion, master blender for Scotland’s favourite whisky, The Famous Grouse, will be on hand, hosting an informative session on the art of blending whisky and encouraging participants to identify their preferred flavours to create a bespoke blend based on their personal tastes.

“We’re very excited about The Famous Feastival – the programme is a heavenly blend of some the very best tastes and sounds that Scotland has to offer and will appeal to foodies and festival go-ers from across the country.”

For more information please visit www.thefamousfeastival.net  or to book by phone call 0844 481 8898.

About Tom Kitchin: Tom Kitchin is chef proprietor at one of Scotland’s finest restaurants, The Kitchin in Edinburgh. The restaurant opened in 2006 and was quickly awarded a Michelin star six months later in 2007. As well as running The Kitchin, Tom and his wife opened gastro pub The Scran & Scallie alongside fellow chef, Dominic Jack, in March this year. Tom is a regular guest on Saturday Kitchen Live, has often appeared as guest judge on Masterchef and recently headlined the BBC2 series, The Chef’s Protégé.

 The Kitchin was opened in June 2006 by husband and wife team, Tom and Michaela Kitchin, on Edinburgh’s stylish Leith waterfront.

 In January 2007, The Kitchin was awarded a coveted Michelin-star after only six months, making Tom the youngest ever Scottish Chef Proprietor to achieve one at the age of 29.

 Tom Kitchin demonstrates a culinary CV that extends from early training at the Gleneagles Hotel to experience harvested from some of the world’s most renowned chefs and restaurants, including Pierre Koffmann and the three-star La Tante Claire restaurant in London, three-star Michelin restaurant Guy Savoy in Paris and Alain Ducasse’s Louis XV restaurant in Monte Carlo.

 As a result, Tom Kitchin presents a menu, which shows his love of seasonal Scottish produce, intertwined with French undertones and an appreciation of the best ingredients available. The Kitchin’s philosophy, ‘From Nature to Plate’, is a true reflection of chef Tom Kitchin’s passion for the finest, freshest Scottish seasonal produce

 In March 2013, Tom and fellow chef, Dominic Jack, opened gastro pub, The Scran & Scallie, alongside the management team behind The Kitchin and Castle Terrace Restaurant. The gastro pub, which is located in Stockbridge Edinburgh, presents a warm, family-friendly atmosphere, and showcases menus developed by Tom Kitchin and Dominic Jack of simple, affordable dishes executed to perfection, which demonstrate their expertise, passion and knowledge of the best suppliers in Scotland. The Scran & Scallie follows the ‘From Nature to Plate’ philosophy the teams at The Kitchin and Castle Terrace Restaurant have become renowned for.