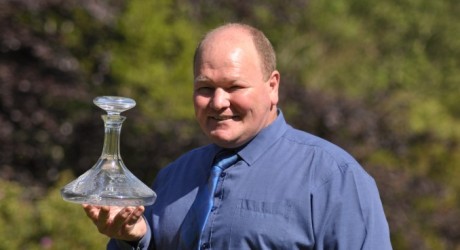 BALLATHIE Country House Hotel has just been awarded one of the Scottish Hospitality Industry’s most coveted accolades; Independent Hotel of the Year 2014 at the Catering in Scotland (CIS) Excellence Awards.

At a glittering awards ceremony last night general manager Jody Marshall was delighted to be called up to the stage to collect this prestigious award on behalf of Ballathie House Hotel.

Says a spokesperson: “The CIS Excellence Awards has become established as one of the most important and well-respected business awards programmes in Scotland recognising and rewarding true excellence.

“Judged by some of the most prominent chief executives, chairs, hoteliers and chefs in the industry those nominated or being entered are up against the stiffest of competition.”

The CIS Excellence Awards’ judging panel found Ballathie House Hotel to be a ‘successful, stand-alone establishment located in Scotland which possesses a 100 per cent commitment to guest satisfaction’.

Amongst other qualities they looked for a hotel which demonstrated without doubt that they ‘recognise the importance of staff and skills development as essential elements of the business’.

Behind this achievement is unquestionably Ballathie’s general manager, Jody Marshall.

Since joining the family owned hotel eighteen months ago, the dynamic manager has initiated numerous programmes and developments to benefit the staff, hotel and ultimately enhance guest satisfaction.

It is the second time Jody has collected this award; two years ago Jody led The Summer Isles Hotel to the same achievement.

It is understood that Jody is the only hotel general manager to have led two establishments to achieve this great success.

“Being named Independent Hotel of the Year is a huge credit to my management team and all the staff who work tirelessly looking after our loyal customers,” says Jody Marshall.

“It is a great achievement and an honour to be holding this award on behalf of the team at Ballathie.”

The CIS Excellence Awards has clearly recognised Ballathie’s commitment to a high level of environmental awareness, exceeding customer expectations and being an integral part of the local community, working closely with local suppliers.