Media Release: Tuk Tuk is ‘streets ahead’ in Indian dining 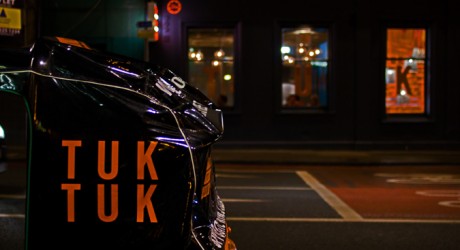 TUK TUK, the restaurant that has changed the face of Indian dining in Scotland, is celebrating its bumper first year of success with the launch of a new menu.

TUK TUK, found on the corner of Edinburgh’s Leven Street, has delighted more than 50,000 diners in the last 12 months with its unique take on the Indian tradition of street food.

Frustrated by the standards of Indian food in Britain, which conjures up images of greasy poppodoms and fluorescent tikka mossalla, Tuk Tuk decided to shake things up. The team took inspiration straight from the thousands of street vendors of India who nourish the appetites of busy office workers and sweaty tuk tuk wallahs. Tuk Tuk uses a team of hand-picked head chefs with experience of food vending on streets and beaches of India.

The menu boasts a choice of inexpensive Indian tapas style meat and vegetable dishes with the promise of each dish being be brought from kitchen to the table in four minutes.

Making their first-ever appearance in Scotland

Now after a year after bringing a new lively, dining experience to Edinburgh, TUK TUK is to change its menu to offer a range of even more exciting dishes – some making their first-ever appearance in Scotland.

A spokesman for TUK TUK said: “The response we’ve had from guests so far has been overwhelming. Everyone I speak to that visits seems to love the street food concept, away from the typical formal, slightly-stuffy setting of a traditional Indian restaurant in Scotland.

“In India, street vendors feed everyone from busy office workers and sweaty rickshaw-wallahs to hungry school children, so I wanted to create a restaurant that not only gave a nod to my heritage but also encouraged people from all walks of life here in Edinburgh to come to enjoy eating our traditional dishes.

“We are passionate about using the freshest ingredients and spices in everything we make and our chefs use the same methods as used in India.

“TUK TUK is the perfect place for people to relax or chat away amongst our lively atmosphere and enjoy our twist on eating in an Indian restaurant.”

Inspired by the Indian rickshaws called Tuk Tuks, Mukta transported two of the three-wheeled, bright orange vehicles from India to Edinburgh to ferry around diners on special occasions.

Mukta added: “Tuk tuk stays true to its routes and serves its street food in inexpensive small portions which lends itself to the sharing dining experience. Diners can be found sharing a Railway lamb Curry, Vegetable Franky, Bun kebabs and massalla chips while looking out the window to see a fleet of Tuk Tuk’s own three-wheeler auto-rickshaws ready to pick up more hungry customers.

“I want people to have a true taste of life in India and what better way than to show them everything from the transport, the Bollywood music we listen to and the way we eat.”

With the summer approaching Tuk Tuk is introducing five new dishes all reflecting the light airy dishes that would be typically enjoyed in India during the sweaty monsoon season.

Tuk Tuk’s bring your own bottle policy (no corkage fee) keeps the prices low and its location opposite the King’s theatre makes it perfect for pre-theatre dining. The range on the menu which caters to all ages makes it accomodating for familes where Indian food was not typically deemed to be.