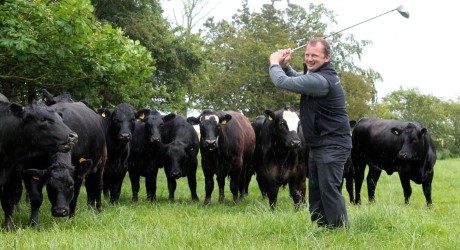 AN Aberdeenshire  farm is teeing off its award winning meat in preparation for a top golf competition coming to the city this week.

The Store, based at Foveran on the outskirts of Aberdeen, has been awarded the contract to supply the Aberdeeen Assest Management Scottish Open 2014 with its Aberdeen Angus beef produce during the event, which takes place at Royal Aberdeen Golf Club from Thursday to Sunday (10-13 July).

The family-run farm and farm store, which rears its Aberdeen Angus cattle on a grass based diet all year round, will provide meat produce to the event’s catering company, Amadeus, which is operating all catering outlets for visitors and players during the four-day tournament, as well as providing all the corporate hospitality.

The Scottish Open is expected to welcome crowds of more than 20,000 people, with many famous golfers joining the line up including, Rory McIlroy, Lee Westwood, Ernie Els and local golfers, Paul Lawrie and Richie Ramsay.

The Store, which was launched in 2000, has a passion for high quality local produce, was selected to supply its meat as part of Scotland Food & Drink Food Charter, which has been introduced to ensure that caterers source ingredients and supplies from producers in Scotland’s natural larder.

The Store has its own farm and butchery on-site allowing them to follow a farm to fork approach, giving them 100 per cent traceability on all their products.

The Store managing director and farmer, Andrew Booth, said: “It’s great to be involved with the upcoming Scottish Open, and especially great to see local businesses being utilised for the event.

“As we are located only ten minutes from Royal Aberdeen, we were already excited about the event but to be awarded the contract is an extra bonus. It will be fantastic to showcase The Store’s meat to the large crowds and is good opportunity to highlight the quality of Scottish produce from visitors across the world attending the golfing event.”

The Store is open seven days a week from 10am – 5pm and has its own farm shop and deli, kitchen and coffee shop on-site.