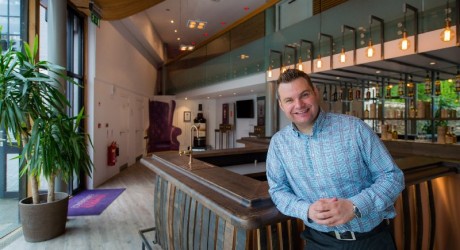 The prolific piper who has travelled the world playing the bagpipes, medically-retired as a professional musician in 2011, leaving behind his beloved pipes to retrain for a career in business.

His segue into Scotland’s business community, and passion for brand Scotland, led him into the whisky industry working in Edrington Group’s brands team, and to his recent appointment as general manager of Scotland’s oldest working distillery, Glenturret.

Stuart commented: “I am really delighted to have been appointed as general manager of Glenturret Distillery, home of The Famous Grouse Experience and one of Scotland’s best visitor attractions. I am really looking forward to working with our magnificent team here to develop its future as a major tourism destination and one of Scotland’s very rare artisan whisky producers.”

“What we do at Glenturret is very special, and one of the only distilleries in Scotland where visitors can see whisky being produced by hand, in the traditional way. Having travelled the world as a bagpiper, and been welcomed by a great many countries, I look forward to reciprocating those warm welcomes to visitors to our beautiful distillery from around the globe.”

Stepping out amidst the rolling hills of Perthshire, you might be mistaken for thinking Stuart’s celebrity filled days are over. However, just weeks into his new role, he stepped up to play host to the Earl and Countess of Strathearn on their first official visit to the area, and has also formally opened Scotland’s Year of Homecoming 2014 Bannockburn Live celebrations at Pipefest at the end of June.

His team are currently tuning up for their next role, as home to The Famous Grouse Experience, and the official whisky provider of the Commonwealth Games, where over one million spectators are expected to descend in the coming weeks, hunting for new world records and inspirational moments. And, with a clutch of world records of its own to show off, thousands of visitors to Glenturret Distillery can be guaranteed a holiday snap with a statue of Towser, the world’s Greatest Mouser, as well as the world’s largest bottle of whisky.

Stuart gets the last word though: “It’s a busy role, but one for which – I believe – I most definitely have the puff.”