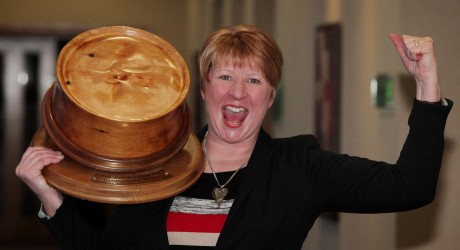 THE Scotch Pie Club is delighted to announce that the winner of the 16th World Scotch Pie Championship is Murrays Bakers of Perth making them THE WORLD SCOTCH PIE CHAMPION 2015.

Following the busiest judging day ever with a record entry of 100 butchers and bakers entering some 567 pies, pasties, sausage rolls, bridies, savouries and apple pies into the competition and with some 300 hopefuls attending the awards luncheon in Cumbernauld, Murrays Bakers of Perth can truly be proud to have produced the best Scotch Pie in the land.

Linda Hill, of Murrays Bakers, said: “I am delighted! To have been given the ultimate accolade and to be able to call our pie the WORLD CHAMPION as judged by a panel of experts is just fantastic. This award is proof that the Murrays team is the best in the land. I am really looking forward to the year ahead and to selling more of our winning pies than ever.”

Says head judge Robert Ross who has, for many years now, overseen the judging process to ensure only the best pies are recognised and that only the best of the best is crowned world champion: “The competition, which has run for 16 years, aims to highlight that bakers and butchers create high quality artisan pastry products. Recognising the ‘great and the good’ in this way rewards excellence and raises the bar in the industry.”

And, after many years of exceptional service to the bakery industry in Scotland and having overseen the World Scotch Pie Championships since its inception, Robert Ross has announced that he is to retire as head judge for the competition.

Alan Clarke, of Scottish Bakers, said: “Once again we have brought together the best pies and baked goods in the land and today we can really celebrate the achievement of our hard working butchers and bakers. My heartfelt congratulations go to our winner, and indeed everyone today taking away a prize, they are all winners in my book.”

The competition is supported by Scottish Bakers and the Scottish Federation of Meat Traders. Both trade associations actively support and promote bakers and butchers in Scotland by encouraging and sharing best practise. Alan Clarke and Douglas Scott, respective chief executives of both associations were impressed with the overall standard of the products and gave thanks to Bako Northern and Scotland who have sponsored the competition.

The Scottish Federation of Meat Traders is the trade organisation representing Scotland’s craft butchers. The 440 member shops are supported from its Perth base with help and advice. Members are encouraged to produce innovative and unique products that create compelling reasons to shop at specialist meat retailers.

And also twitter.com/allFoodPR for food-related media releases on the site!