Media Release: Entiér to be the headquarters for Scottish Culinary Team 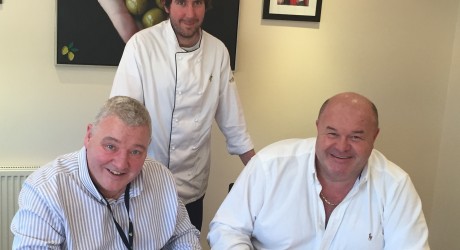 AT the beginning of a new year that celebrates the Food and Drink of Scotland, the Federation of Chefs Scotland (FCS) is delighted to announce that Entiér Limited will now provide the new headquarters and training facilities for the Scottish Culinary Team.

Entiér was chosen as the Scottish Culinary Team Partner due to an unique combination of key factors.

It was important to the FCS to work with a Scottish company who had an outstanding commitment to staff development and training. Their impressive in-house training facilities will provide a fantastic HQ, meeting the training requirements of the team. The industry expertise of the Entiér personnel will ensure the smooth delivery of the work needed to get the Scottish Culinary Team to the ‘Culinary Olympics’.

Ian MacDonald, president of the Federation of Chefs Scotland, said: “We are delighted to be working with Entiér to deliver a competition ready Scottish Culinary Team for the Culinary Olympics in Erfurt in 2016.

“Although our new team HQ will be in Aberdeen, we would encourage chefs from all sectors of the industry and regions of Scotland to think about competing for a place to represent their country on the world’s culinary stage.”

Team recruitment will get underway at the Scottish Culinary Championships taking place on 4-5 March at ScotHot, SECC Glasgow.

Previous Culinary Team managers – such as Kevin MacGillivray, executive chef, MacDonald Hotels – will be scouting for talent amongst the competing chefs. There will also be a recruitment contact on the FCS stand for the two days of ScotHot for chefs interested in working with the team to come along and find out more.

Cabinet Secretary for Rural Affairs, Food and the Environment Richard Lochhead MSP, said “The Federation of Chefs Scotland has played a vital role in ensuring that high culinary standards have consistently been achieved across Scotland, as well as raising the profile of our Food and Drink abroad, through work with the Scottish Culinary Teams.

“I am delighted to see the collaboration with Entiér Limited, a company that has such a great focus on developing skills and using local produce. Having recently visited Entiér’s fantastic new facilities myself, I have no doubt that they will be of great benefit to the Scottish Culinary Team over the next few years.

“I will be watching the team’s progress with interest and I am sure that they will do us proud, helping to enhance the reputation of our Food and Drink and further our aim to make Scotland a Good Food Nation.”

Peter Bruce, CEO of Entiér, said: “It is a tremendous honour for Entiér to be asked by the FCS to be their Scottish Culinary Team partner.

“Our reputation for excellence has already made us a leading catering and support services company in the industry, and we are proud to play an instrumental role in what is the heart of what we do and why we exist – talented chefs who are trained with first-class skills and serving quality food.

“Our philosophy from our inception has been to support our local producers and suppliers in Scotland and now we get the chance to lead the Scottish Team to success and prove it to the world.

“Our continual use of innovation has attracted the attention of the FCS, and this is just one of many milestones Entiér will achieve – we have plenty more in store.”

With a fine tradition of excellence on a global scale the Scottish Culinary Team has always excelled in international competitions often ranking in the top ten in the international league tables. This new partnership will enhance delivery of a team that showcases the culinary talent that exists in Scotland.

The Federation of Chefs Scotland (FCS) manages the Scottish Culinary Championships which take place every two years at ScotHot. This year was the 28th Scottish Culinary Championships with over 150 chef competitors and 40 competitions. The FCS was formed in June 1994 in response to a need to have a chefs’ organisation democratically managed by Scottish chefs. The FCS is an organisation run by chefs for chefs and is wholly autonomous with all of the funds that it raises reinvested in the industry in Scotland www.scottishchefs.com

Founded in 2008 as an independent catering company, which offers top quality food and service both offshore and onshore. An all-encompassing catering and support services company, they provide first-class catering, housekeeping, maintenance and hospitality services to the oil and gas, education and business sectors as well as top quality catering for corporate events, private functions and weddings.

The International Culinary Exhibition, known to chefs as the IKA/’Culinary Olympics’, has been running for 112 years. The first event was held in Frankfurt in 1900 and, as with Olympic tradition, the competition is held every four years. The German Chefs Association (VKD) and the Messe Erfurt GmbH collaborate on the show which will host 45 other teams from across the globe.

Quaich Marketing, on behalf of the Federation of Chefs Scotland · Food · Scotland-wide