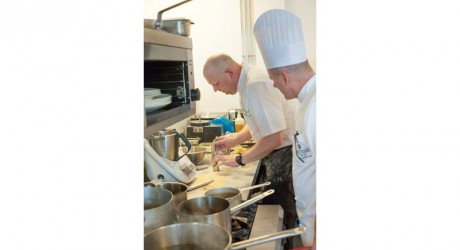 WILDE Thyme’s head chef and culinary rising star, Andrew Laycock, has booked a place in the final of this year’s Scottish Chef of the Year Awards.

Andrew is now one of eight finalists who will all compete for the coveted prize at the live final at the ScotHot Exhibition at the SECC on March 5th.

Organised by the Federation of Chefs Scotland, Andrew will create a four-course meal in front of an audience of leading industry figures and a tough judging panel in his bid to be crowned Scottish Chef of the Year. Andrew is up against some fierce competition including 2014’s Masterchef: The Professionals winner, Jamie Scott, from Rocca Restaurant in St Andrews.

Honing his culinary talents at Wilde Thyme, the Comrie-based luxury food and event caterers, has helped Andrew perform at the highest level with some of the best chefs in the country.

Andrew commented: “I am very proud to have progressed to this year’s final. The standard of the chefs and the quality of the food has been phenomenal and it has been a great experience to be able to use my skills and experience to compete with so many talented people. Now I’m looking forward to the final and will be working hard to create a menu that wows the judging panel.”

Andrew Hamer, managing director of Wilde Thyme, added: “The team here at Wilde Thyme are delighted to see Andrew make the final in a notoriously tough competition. He has worked incredibly hard to get to this point and thoroughly deserves his place up there with some of the best chefs in the country. We know he’ll do brilliantly in the final.”

Andrew has positioned the company to live by its ethos of ‘Delivering the exceptional restaurant experience to an event environment’.